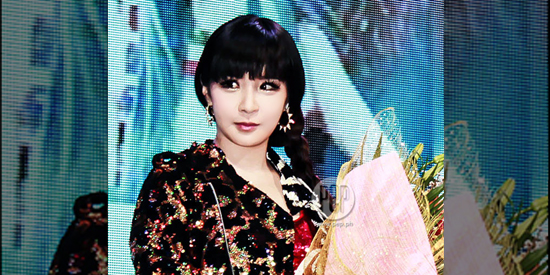 YG Entertainment CEO Yang Hyun Suk clears Park Bom's name on drug-smuggling scandal: "Up until 4 years ago, Bom had been using the medication that she had been formally prescribed by the university hospital in the U.S., but because she could not go to the States due to her busy schedule, in the process of receiving the medication from her mom and grandmother, it had become a problem because it is a medication that is prohibited in Korea."

Park Bom is a member of the South Korea girl group 2NE1 with Sandara Park, CL, and Minzy.

According to an exclusive report by Segye Ilbo, as translated by allkpop.com, the singer used international courier delivery service in an attempt to smuggle narcotic amphetamines into South Korea back in October 12, 2010.

The report said that Park Bom was caught trying to smuggle 82 amphetamine pills from the U.S. through Fedex.

However, the package was put on hold by the customs at the Incheon International Airport.

Amphetamines are used as prescribed medical treament in some countries for attention deficit hyperactivity disorder (ADHD) and narcolepsy, among others.

However, the use of this prescription drug is banned by Presidential Decree in South Korea.

The article also revealed that the Incheon District Prosecutors—who handled the case—decided to suspend Bom's case in 2010, which means they would neither investigate or penalize her for the case.

The case was officially registered on October 19but was suspended November 30.

The prosecution discovered that the package was supposed to be delivered to Park Bom’s relative after investigating the receiving address.

Allkpop.com released his full statement thorugh an open letter to the fans and explained his talent’s use of prescription drugs.

Yang Hyun Suk explained why he was the one who released a statement instead of YG Entertainment as a group.

He said, “To be accurate, the content in the article was something that happened 4 years ago, and something that I was first told of then when Park Bom's parents came to us and told us that they had been investigated, and also about a shocking incident Bom had experienced in the past and her medical history.

“So until then, all of YG as well as the 2NE1 members had no knowledge of this.

“That's why I thought that rather than to have YG, which doesn't really know the situation, release an official statement, it is better for me, who directly heard of all this [from Bom's parents], to tell you about it.”

The music executive also revealed his thoughts about the issue and said: “If you combine the training years, then the amount of time I've been with 2NE1 is 9 years.

“The 2NE1 members I have watched over for 9 years do not smoke... do not drink much... and seems to me to have never once gone out to hang out at a club besides for official events.

“At least from what I know, that's how it is... and also because I've never heard of rumors of that sort from those around me.

"But the Bom that I know to be this way has suddenly become overnight a 'drug smuggler' according to the title of the article."

The CEO couldn't bare to see his talent be bashed by netizens and felt that it was his duty to explain Park Bom's side.

“It's absurd and shocking that I don't know what to start off saying.

“Should I be explaining this absurdity?

“Will that end up making this situation even bigger?

“It's true that these did momentarily present a concern.

“However, for all the fans of 2NE1, who are currently on their world tour... for the silly and dongseng-like Bom who became a drug smuggler overnight, I thought that I couldn't just sit back and watch.”

The music producer finally revealed that Park Bom suffered a psychological disorder after her friends’ death.

“As fans already know, Park Bom spent a long time in the U.S. before 2NE1 debut, and she has said that there was a time when she dreamed of becoming a soccer player.

“However, she directly witnessed a close friend dying during a game, and after that, Bom had spent difficult days as she fell into sorrow and shock that was difficult for her to handle at a young age.

“After that, she spent several years receiving psychological counseling and treatment and used drugs that were prescribed to her by a famous university hospital in the U.S.

“After that incident, Park Bom was no longer able to continue on with soccer, and after changing her dreams to that of becoming a singer, she came to Korea and participated in the YG audition.

“It's a day I remember clearly.

“The reason that I remember Park Bom among the numerous audition contestants is because as soon as I saw her, she had boldly stated, ‘If it's not YG, I'm not going to be a singer.’

“Although she didn't pass that audition, she came again the year after that and she didn't make it again, but in her third year, she qualified in first place among the thousands that had participated, so I think that is why Park Bom remains clear in my memory.

“The reason why I am talking about these seemingly irrelevant matters is that considering that I did not know that she played soccer or about her medical history until her father told me 4 years ago, even though it's been 11 years since I first saw Bom, and that she's never brought this up to her members, it seems clear that this is a painful memory that Bom doesn't want to bring back.

“But luckily, her medical record over the past several years and her prescription from the university hospital were received and submitted during the investigation, so it was an event that was safely and soundly wrapped up with every evidence being provided.”

To end his letter, Yang Hyunsuk defended Park Bom and said that she didn’t know the prescription drug is banned in South Korea and has been taking another drug prescribed by a university hospital in Korea.

“In the case of Bom, she only knew that the medication she took in the States was not available in Korea.

“It doesn't seem she understood that it was a medication that was prohibited in Korea.

“After realizing this after the investigation 4 years ago, from what I know, she has been using another medication prescribed by a university hospital in Korea.

“Because they've been busy with their world tour, I haven't seen Park Bom in a while either, but I ran into her when I came out of the office to record last night and saw her shed tears throughout the night because of the articles coming out.

“After seeing her this way, I feel torn that it has come to a situation where I have to explain a past that Bom does not want to reveal.

“I want to wrap up my words as I apologize for bringing about worry to many of you. I will greet you again with happy news soon. Thank you.”

2NE1 recently staged their first major concert in the Philippines last May 2014.

BLACKJACKS BACK-UP. After Yang Hyun Suk’s open letter was released, Blackjacks (2NE1 fans) did some major research to back up the CEO’s claims.

Entertainment blogsite Koreaboo released the newspaper archives that the Blackjacks unravelled to clear up Bom’s name about the drug smuggling scandal.

In one of the newspaper archives, Jenny Park (Park Bom’s English name) was mentioned by the Sun Journal on a story about the top athletes of Gould Academy’s soccer team dated December 18, 1998.

Park Bom is a known alumna of the said school. 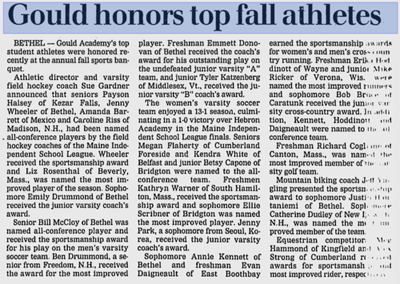 Another newspaper archive from the Sun Journal reports the death of a Gould Academy soccer player because of aneurysm.