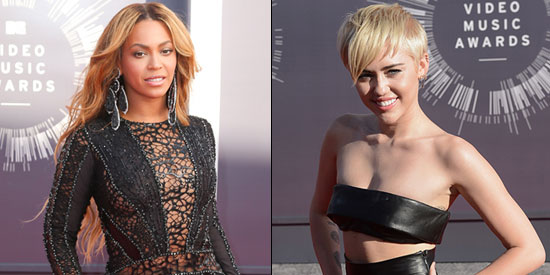 Beyonce (left) dominated at the MTV Video Music Awards 2014 after taking home four prizes at the annual bash, while Miley Cyrus (right) won Video of the Year for "Wrecking Ball."

Beyonce swept the board at the MTV Video Music Awards 2014.

The 32-year-old singer was honored at the annual event last Sunday night, August 24, with the Michael Jackson Video Vanguard Award.

She also collected the gongs for Best Video with a Social Message and Best Cinematography for "Pretty Hurts," while she and Jay Z picked up the Best Collaboration prize for "Drunk in Love."

After performing a medley covering the entirety of her recent self-titled album, Beyonce shared a kiss with her husband and was also joined by their daughter Blue Ivy as she collected her lifetime achievement award.

As her family presented her with the Video Vanguard prize, the singer's two-year-old girl showed her approval, as she shouted: "Yay, mommy!"

Elsewhere, Miley Cyrus won the Video of the Year prize for "Wrecking Ball."

An in emotional speech, the 22-year-old said: "I am accepting this award for the 1.6 million runaways and homeless youth in the United States who are starving, lost, and scared for their lives right now.

"I know this because I'm one of those people.

"Although I've been invisible to you I have a lot of the same dreams that have brought me to you tonight."

He then directed fans to visit Miley's official Facebook page, where a statement was posted encouraging people to help "end youth homelessness."

In a statement, she wrote: "Help me raise awareness and funds to end youth homelessness!

"This is just the beginning for me, but we're going to get started now by focusing on My Friend's Place, a homeless center for young people in Hollywood."

The ceremony started with a stellar performance from Ariana Grande, Jessie J, and Nicki Minaj as they sang their hit "Bang Bang," while the "Anaconda" singer also almost suffered a wardrobe malfunction later in the show.

Best Direction: DJ Snake and Lil Jon - "Turn Down for What" (Directors: DANIELS)