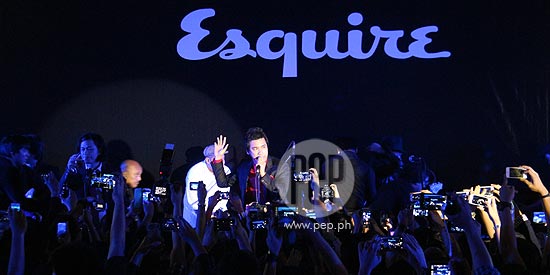 There is a rumor floating around that Ely, Raimund, Marcus, and Buddy are bound to a contract prohibiting them to perform in the Philippines as the Eraserheads. Regardless, their fans got nostalgic and enjoyed the night singing along to the E-Heads songs last night, September 4, at the launch of Esquire's September 2014 travel issue at Dusit Thani, Makati City.

The Eraserheads surprised their fans with an unexpected live performance of their classic hits "Magasin" and "Alapaap" at the launch of Esquire's September 2014 issue last night, September 4, at Dusit Thani Hotel, in Makati City.

The launch instantly turned into a reunion party of the band and their solid supporters, who were thrilled to see and hear the iconic OPM band revive the sounds of the 1990s.

THE REUNION. The Eraserheads last performed as a group in the Philippines via the historic The Final Set concert on March 7, 2009, at the SM Mall of Asia Concert Grounds.

"It started over a few bottles of beer," said Esquire editor-in-chief Erwin Romulo when asked about the concept of the September 2014 issue.

It has been almost 10 years since the band disbanded, and Esquire brought them back together for the sole purpose of coming out with a CD of two new singles, “Sabado” and “1195.”

The CD is only available as an insert of the magazine's travel issue this month.

At the launch last night, Erwin called in all the members of the band—starting with Raimund on drums and percussion, followed by their very wacky and funny lead guitarist Marcus, then Buddy Zabala on bass, and their lead vocalist Ely.

The sight of four of them on stage made diehard fans burst into tears.

When the band left the stage, everyone thought the night was over. But it turned out to be just the beginning of an epic evening.

The moment they saw the band back on stage, fans started screaming, boxing their spot in the crowd.

Before the band's performance of the popular "Magasin," Ely said, "You did not see Eraserheads tonight. This did not happen.

"Performing tonight are Sandwich and Pupil."

There is a rumor floating around that Ely, Raimund, Marcus, and Buddy are bound to a contract prohibiting them to perform in the Philippines as the Eraserheads.

Regardless, a lot of '90s kids got nostalgic and enjoyed the night singing along to the Eheads songs.

This was followed with "Alapaap," which they sang on stage with Kean Cipriano, Quark Henares, and Jun Sabayton.

“Magasin” and “Alapaap” are two of their 1994 hit songs from the album Circus.

SPOTTED. The Eraserheads reunion was indeed a celebration for their diehard fans.

Esquire's Travel Issue will be available in leading bookstores, newsstands, and supermarkets beginning Thursday, September 4. The digital edition will be ready for downloading over the weekend.

Note: The print cover price of Esquire’s September issue inclusive of a CD bearing the Eraserheads’ latest recording is P400.

ONLINE PURCHASE. Two new Eraserheads’ tracks, “1995” and “Sabado”, are available exclusively for playback on the e-mag version of Esquire’s September issue. Customers who purchase the September issue on the Esquire Newsstand app (Apple devices only) or the buqo app (Apple and Android devices) can listen to these tracks this entire month of September. After September 30, the tracks will be removed from the e-magazine so diehard Eraserheads fans need to grab their digital copies now.