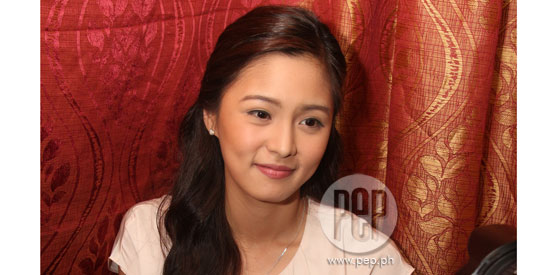 At 24 years old, Kim Chiu has reached milestones in her life that other stars her age can only dream of.

The ABS-CBN actress is busy wrapping up scenes for her latest teleserye, Ikaw Lamang, which is slated to end its seven-month run by October 25.

PEP.ph (Philippine Entertainment Portal) and other members of the entertainment press had the chance to interview Kim and her co-star Coco Martin during a set visit to their location shoot in Cubao.

During the interview, Coco revealed that Kim is about to make another big change in her life.

Kim admitted that she has already purchased the lot where her new house will be built.

Kim plans to sell their current house, located in an exclusive subdivision in Quezon City.

Her three-storey house was featured in the December 2011 issue of YES! Magazine. She bought the 600-square-meter property in 2009 and in 2011, Kim and her siblings moved into their own place after spending her childhood years sharing residences with relatives.

ON PORTRAYING MULAN. Kim recently achieved another milestone in her career when she was chosen to portray Mulan in an upcoming Disney calendar.

How did she end up getting chosen to be part of this project?

How did she feel about portraying Mulan?

Is Mulan her favorite Disney princess?

Kim recalled that she got to work with representatives from Malaysia and Indonesia during the pictorial that was held in Thailand.

ON COCO'S BENCH CONTROVERSY. Coco Martin became involved in a controversy because of the latest Bench fashion show.

Kim recalled that Coco was very affected by the public's negative reactions to the segment that certain sectors found to be offensive.

How did Kim show her support for her leading man?

The Ikaw Lamang actress said she was surprised by the outrage sparked by the segment wherein Coco held a leash that was tied around the neck of the foreign model, who moved about on all fours like a tamed animal.