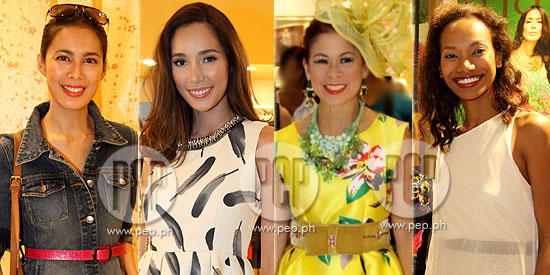 The indignation of netizens over the use of a Colombian designer for the national costume of Mary Jean “MJ” Lastimosa, the Philippine bet to Miss Universe 2014, has reached fever pitch.

It is now a national issue, and celebrities are weighing in.

MJ wore the outfit at the preliminary competition of Miss Universe last January 22, and it immediately became the subject of mockery in social media for resembling a birthday cake.

The gown was made by Colombian designer Alfredo Barraza, who has been doing the outfits of Philippine contestants in Miss Universe pageants for a number of years now.

The bone of contention: the national costume should have been done by a Filipino designer.

He said that while his designs may not be be pageant-fit, he can vouch for the competency of local designers in dressing up the Philippine bets in international competitions.

He then urged the Binibining Pilipinas Charities Inc. founding director Stella Marquez-Araneta to check out the creations of Filipino designers.

Ms. Marquez-Araneta—a Colombian who became the first Miss International in 1960 and married Filipino businessman Jorge Araneta—has picked Barraza to be the outfitter of Philippine candidates in Miss Universe.

Director and screenwriter Jose Javier Reyes has also been vocal on Twitter in criticizing Ms. Marquez-Araneta for her decision.

Aghast at Ms. Marquez-Araneta’s statement that she hasn’t found any local design good enough for the international pageant, the directed tweeted:

“Bad taste is one good reason why you think Filipino designs are not good enough for Filipinos to design their own national costumes, Stella!”

At an event last Saturday, January 24, PEP.ph (Philippine Entertainment Portal) talked to Miss International 2013 Bea Rose Santiago, who revealed that she had questioned Ms. Marquez-Araneta’s decision not to get more pageant wardrobes from local designers.

“We were like, ‘Madam [Stella], why don’t we try our national costumes during the press presentation?'” Bea related, explaining she had hoped it could help improve the situation before the actual pageant abroad.

She added, “But she had her own answers and we respect that.

“She’s not closing any doors. If she’s comfortable with it, yes she would.

“She’s opening doors slowly, but you can’t force her if [it’s] against her will.”

Actress-model Angel Aquino also said there are a lot of Filipino designers who can come up with creations as good as, if not better than, any foreign designer.

"I totally agree because sometimes yung creations natin are even better.

“They’re really on a par with what foreign designers.

"And I don’t see why we cannot trust them with dressing up our own beauty queens, especially when competing internationally.

“And I think it will be appreciated by audiences abroad kasi at least we’re wearing our own.

"I think we should start doing that.”

Fashion maverick Tessa Prieto-Valdes joined in, “I’m really all for something like that.

"Anything you can represent the Philippines in any way around the world, me of all people.

"Wherever I go around the world, I super promote Filipino designers from Cebu or from Ilocos, everywhere.

“I think it’s really one of those... they didn’t really make an issue about it.

"But since Cary brought it up, maybe it’s a good wake-up call na kailangan i-represent the Philippines talaga whenever we can.

"Especially now, you know, Filipina beauty is so popular, winning streak even for Philippine fashion, which I promote every day.”