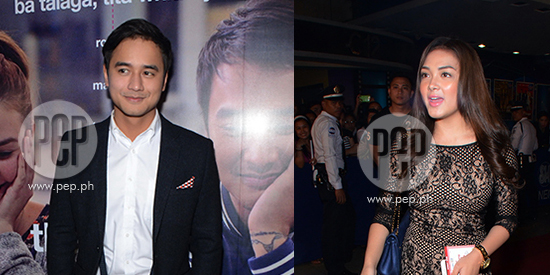 During the premiere night of That Thing Called Tadhana at the SM Megamall Cinemas, last February 3, Meg Imperial talks about her current relationship status with the movie's lead actor JM de Guzman.

"Me and JM are friends. We're good friends.

She, however, admits that they do keep in touch.

When asked if JM has a chance on her if ever he takes things to the next level and finally courts her, the actress replied, "If may chance siya 'pag nangligaw, something like that?

The actress also says that she's currently open on having a relationship if the right guys comes.

"'Pag may possibility, why not?

JM DE GUZMAN, STILL NOT READY. The actor, however, states that after going through a though phase, he's still not ready to fall in love again.

Although JM has said that he is not yet ready to enter into another relationship, it seems that the young actor has renewed his ties with ex-girlfriend Jessy Mendiola.

The two Kapamilya stars have been spotted together in different occasions.