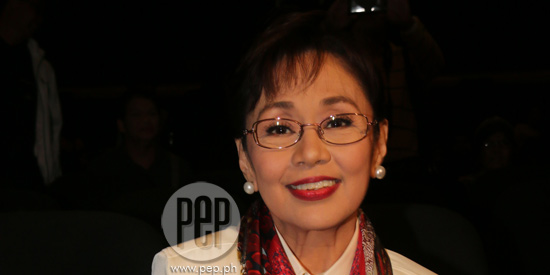 This 2015, moviegoers will have the chance to see the digitally restored version of T-Bird at Ako, the lesbian-themed movie starring Vilma Santos (in photo) and Nora Aunor.

Vilma Santos says she is looking forward to seeing the digitally restored version of her 1982 movie with Nora Aunor titled T-Bird at Ako.

The trailer of the lesbian-themed movie was shown to audiences last night, January 5, during the event dubbed as Vilma x 3.

Batangas Governor Vilma was the guest of honor at the U.P. Film Insitute in Diliman, Quezon City.

She attended the screening of Bata, Bata... Paano Ka Ginawa? along with her then co-stars Albert Martinez and Cherry Pie Picache.

Her two other films, Anak and Kapag Langit ang Humatol, were also restored in high-definition quality and screened yesterday.

If Vilma could choose which of her movies could be remastered, she enumerated: Dolzura Cortez, Relasyon, Burlesk Queen, Dyesebel, Darna, and Pahiram ng Isang Umaga.

ON LUIS AND ANGEL. As a mother, is she excited to learn that her son, Luis Manzano, is already planning to settle down with Angel Locsin?

In the past, Luis mentioned that he wants to go through the wedding first before giving his parents a grandchild.

She later added: "They're both mature. Kung ready na sila, then why not?