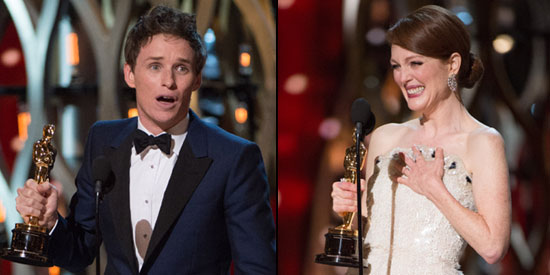 Eddie Redmayne and Julianne Moore pick up their first Oscar wins as Best Actor and Best Actress, respectively, for their performances in The Theory of Everything and Still Alice.

Birdman or (The Unexpected Virtue of Ignorance) was acclaimed Best Picture at the 87th Annual Academy Awards or more popularly known as the Oscars.

Birdman, a film about a faded Hollywood actor famous for his role as superhero struggles to mount a Broadway play, won a total of four awards.

Eddie Redmayne beat heavy favorite Michael Keaton (Birdman) to win Best Actor for his role as English theoretical physicist, cosmologist, author Stephen Hawking who was diagnosed with ALS, or also known as Lou Gehrig’s disease, in The Theory of Everything.

Julianne Moore, on the other hand, won her first Oscar for her portrayal as a Columbia linguistic professor diagnosed with early-onset Alzheimer’s disease.

Interestingly, Julianne and Eddie co-starred in the 2007 film Savage Grace, where they played mother and son who are having an incestuous relationship.

Boyhood, another pre-Oscar favorite, was almost shut out at this year's awards ceremony, managing to win only one award out of its six nominations — Best Supporting Actress for Patricia Arquette, who played a single mother.

On the other hand, veteran actor J.K. Simmons was honored with a Best Supporting Actor win for his performance as an abusive jazz instructor in Whiplash, which went home with three Oscars.

Best Adapted Screenplay was won by Graham Moore for his work in The Imitation Game.

The Oscar voters spread the love for all the eight Best Picture nominees, each receiving at least one win: Birdman and The Grand Budapest Hotel each won four awards; Whiplash had three; while The Theory of Everything, The Imitation Game, Boyhood, American Sniper, and Selma had one trophy apiece.

HOST, PRESENTERS, PERFORMERS. Neil Patrick Harris, who at one point came out on stage in his white underwear (parody of a famous scene in Birdman), did great as host for the first time.

Oscars 2015 proved to be a star-studded event with the presence of some of the most popular (and some of the best) celebrities in Hollywood.

Lady Gaga, probably in her most ordinary-looking makeup and costume, performed some of the songs from The Sound of Music, which is celebrating its 50th anniversary.

The singer, who got a standing ovation for her performance, recently got engaged to actor Taylor Kinney.

Here is the full list of winners in Oscars 2015:

Best Actor - Eddie Redmayne, The Theory of Everything