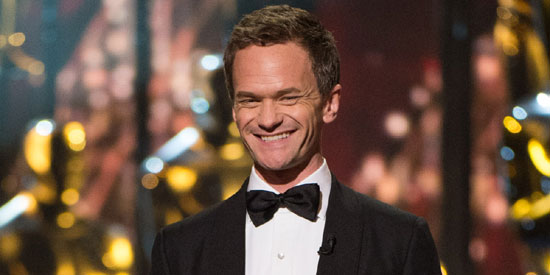 Oscars host Neil Patrick Harris paid homage to one of the evening's biggest winner, Birdman—which picked up four awards—by stepping out on stage at Los Angeles' Dolby Theatre in nothing but a pair of white briefs.

Neil Patrick Harris stripped to his underwear while presenting the Academy Awards.

The Oscars presenter paid homage to one of the evening's biggest winner, Birdman—which picked up four awards—by stepping out on stage at Los Angeles' Dolby Theatre in nothing but a pair of white briefs.

He joked: "Acting is a noble profession."

And the 41-year-old actor later admitted he had extra coverage sewn into his underwear as he was at risk of flashing everything to the star-studded audience.

Asked if he had prepared for the moment or requested extra padding, he said: "The funny thing is, I was running around backstage, going from one side to the other, so I only really had time to take off everything.

"I probably stood with better posture than I probably normally do...

"But, they had to sew in an extra pair of underwear inside the first pair, because under the lights, one pair revealed too much.

"So there wasn't enhancement, just extra coverage—an extra layer because you could see my religion."

He joked to E! News: "I see it all the time so I was sharing it with everyone else—you're lucky."

Neil opened the show with a spectacular song and dance number which also featured Anna Kendrick and Jack Black and saw him take a musical journey through 87 years of movie history.

He also poked fun at criticism the awards have received for a lack of racial diversity.

He announced: "Today we honor Hollywood's best and whitest... I mean brightest."

And he later referred to the outcry when The Lego Movie was omitted from the Best Animated Feature nominations.

Announcing the award, he said: "If you're at an Oscar party with the people from The Lego Movie, now might be the best time to distract them."

Not all of his jokes were well-received, with a quip about Reese Witherspoon, in which he said, "This Oscar presenter is so lovely you could eat her up with her spoon," falling flat and Octavia Spencer seeming unimpressed by a gag which ran throughout the night and saw him ask her to keep an eye on a suitcase locked in a glass case.

And Neil—who began his career as a teenager—was also happy to poke fun at himself.

He said: "She's a phenomenal actress and he's easily the most well-adjusted former child star in the room. Please welcome Kerry Washington and Jason Bateman."

And introducing Idris Elba and Jessica Chastain, he quipped: "In Mandela: Long Walk to Freedom, he liberated South Africa. In Zero Dark Thirty, she brought down Bin Laden. In A Million Ways to Die in the West, I pooped in a hat."