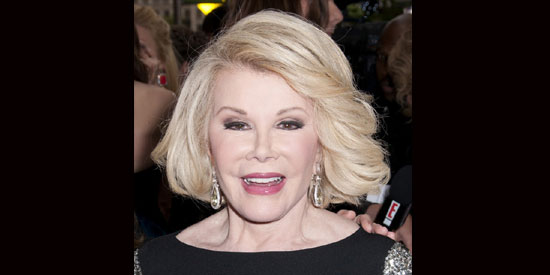 Joan Rivers was ignored in the Oscars' In Memoriam tribute segement, prompting complaints from viewers including her Fashion Police co-host Kelly Osbourne.

Joan Rivers was left out of the Oscars' In Memoriam segment.

The actress and comedienne died last September aged 81 but was omitted from the annual rollcall of the most notable Hollywood stars who have passed away in the last year during the ceremony on Sunday evening, February 22.

Kelly Osbourne, who hosted alongside Joan on TV show Fashion Police, was left outraged that the late star was ignored.

She wrote: "Am I missing something or was @Joan_Rivers really left out of the #Oscars memorials?"

Although she was most well known for her TV work, Joan featured in a number of films including Rabbit Test, The Swimmer, The Muppets Take Manhattan, Spaceballs, and Shrek 2.

However, the Academy has now addressed complaints by saying they were only able to fit a limited amount of people into the section, and have honored her in an online gallery.

In a statement to The Hollywood Reporter, they said: "Joan Rivers is among the many worthy artists and filmmakers we were unfortunately unable to feature in the In Memoriam segment of this year's Oscar show. She is, however, included in our In Memoriam gallery on Oscar.com."

Viewers were also shocked Mother-in-Law and Out to Sea actress Elaine Stritch, who passed away in July, was also blanked by the rollcall, although Bob Hoskins was included after being ignored in a similar section at the BAFTAs earlier in the month.