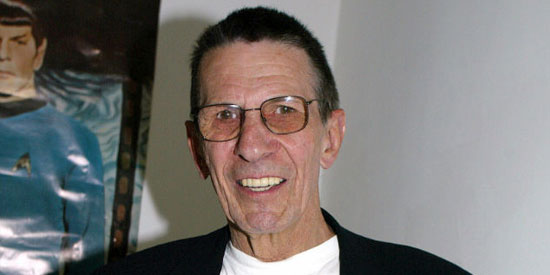 Leonard Nimoy, who is best known for playing the character Spock in the Star Trek TV series and films for more 40 years, passed away at his home in Bel Air, Los Angeles today, February 27 (U.S. time).

The 83-year-old actor, who is best known for playing the character Spock in the Star Trek TV series and films for more 40 years, passed away at his home in Bel Air, Los Angeles today, February 27 (U.S. time).

His wife Susan Bay Nimoy told the New York Times that he died as a result of end-stage chronic obstructive pulmonary disease.

The star, who was hospitalized earlier this week, first revealed he was battling the condition last year and attributed it to years of smoking despite giving up cigarettes approximately 30 years ago.

Nimoy landed the role of Spock in the original Star Trek television series in the mid-1960s while teaching Method acting at his own studio.

During his career, he also directed movies, including two from the Star Trek franchise, and recorded several pop songs.

The 83-year-old star, who played the original Captain James T. Kirk in the second Star Trek pilot, shared a photo of his good friend, who played Mr. Spock for 40 years, on Instagram, with the caption: "I loved him like a brother. We will all miss his humor, his talent, and his capacity to love."

George Takei, who asked his fans to pray for Leonard after he was hospitalized earlier this week, shared his sorrow on Facebook, writing: "Today, the world lost a great man, and I lost a great friend. We return you now to the stars, Leonard. You taught us to 'Live Long And Prosper,' and you indeed did, friend. I shall miss you in so many, many ways."

The legendary star's successor Zachary Quinto, who took over the Spock role in the reboot films in 2013, posted a touching tribute on his social media sites, writing: "my heart is broken. i love you profoundly my dear friend. and i will miss you everyday. may flights of angels sing thee to thy rest."

While NASA posted an old photograph of the late actor standing before the space shuttle Enterprise in 1976, with the caption: "RIP Leonard Nimoy. So many of us at NASA were inspired by Star Trek. Boldly go... "

Nimoy was also very active on social media and last tweeted on Monday, February 23, writing: "A life is like a garden. Perfect moments can be had, but not preserved, except in memory. LLAP"