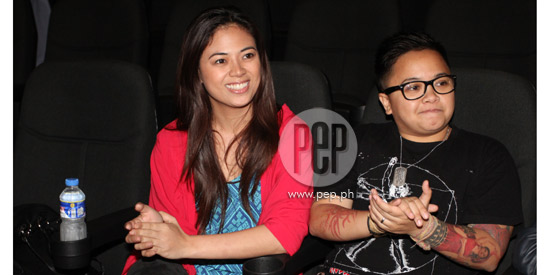 Liza Diño and Aiza Seguerra are planning to have the in vitro fertilization or IVF procedure in the United States. "It will be Aiza's egg and I'll be the surrogate," Liza told PEP recently.

Liza Diño will fully support Aiza Seguerra if and when the singer decides to get gender re-assignment surgery.

PEP.ph (Philippine Entertainment Portal) had the chance to interview Liza exclusively during the awarding ceremony of the 2015 Singkuwento International Film Festival that took place last Saturday, February 28, at the NCCA building in Intramuros, Manila.

Liza and Aiza got married in the United States in 2014, and they had a symbolic ceremony in the Philippines last January 8.

How different is it now that they have tied the knot?

"I'm not as mainstream as others... I'm still trying.

"Pero grabe ang respeto at pagmamahal, feeling ko I can do anything."

She added, "Before, lahat ng ginagawa ko, for my own happiness or kung ano yung magpapasaya sa akin.

"All of the insecurities I had in my life, nawala lahat.

AIZA AS HE... We noticed that Liza used the pronoun "he" to refer to Aiza.

Are there plans for the singer to get gender reassignment surgery?

Liza said, "Malayo pa kasi siyempre, one of the things...

"Iyon ang isang bagay na maaapektuhan if he goes through that transition."

What's Liza's reaction if Aiza does decide to transform into a man?

"But for me, sinabi ko sa wedding vow ko yun na I'll be here to support him.

"But if he will keep... or if he will not go through that process, I'm here for him kasi ganun rin siya sa akin."

Liza reveals that it already means a lot to Aiza when people become conscious about his gender preference.

"Every time na nagbabasa siya ng news, and she is referred to as 'he,' malaking bagay pala yun talaga.

"Those things empower him already."

ON HAVING A BABY. After tying the knot, the focus now of the newlywed couple is to have a child of their own.

As early as February last year, the couple bared their plans to have a child through in vitro fertilization or IVF.

Liza disclosed that they plan to have the IVF procedure in the United States.

How many kids do they want to have?


"It will be Aiza's egg and I'll be the surrogate.

"It's the best set-up talaga. His egg and I'm carrying it. My nutrients and his DNA."