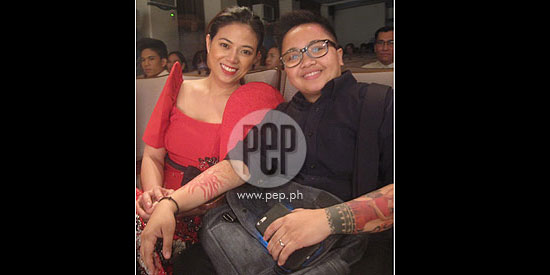 Liza Diño (left) and Aiza Seguerra want to have two kids of their own in the future. The newlyweds might spend two months in the United States in order to complete the in vitro fertilization or IVF procedure.

Months after getting married, Aiza Seguerra and Liza Diño are planning to move to a new house in preparation for a bigger family.

The couple got married in the United States in December 2014 and they had a symbolic ceremony in the Philippines last January 8.

How different is it now that they have tied the knot?

"It's an internal thing when you know that this is it already," said Aiza in an exclusive interview with PEP.ph (Philippine Entertainment Portal) during the awarding ceremony of the 2015 Singkuwento International Film Festival that took place recently at the NCCA building in Intramuros, Manila.

"At ramdam ko yun. I consciously do it."

The singer admits that she has a tendency to keep things to herself, a trait that is slowly being changed by the presence of Liza in her life.

"Pero this time, we're building a family. We talk about everything, we share everything."

Aiza says she and Liza will be moving to a new house soon.

Did Aiza notice anything different with her relationship with Liza's daughter after the marriage?

"What this marriage brought everyone is security: emotional security.

"Ngayon, we're really in this together."

IN VITRO FERTILIZATION. Since the newlywed couple plans to do the in vitro fertilization or IVF procedure in the United States, what will happen to Aiza's career here in the Philippines?

The singer said, "It will take two months at the most, I think.

"We already spoke to the doctor and kailangan lang namin iplano nang maayos.

"In two months, ang plan is to have shows there while I'm there."

Just like Liza, Aiza also wants to have two kids in the future.

When do they plan to do the IVF procedure?

"I just finished recording my album and hopefully, by March mailabas na. It's my first album under Universal Records.

When asked about her plans on whether to undergo gender reassignment surgery or not, the singer politely declined to talk about it.