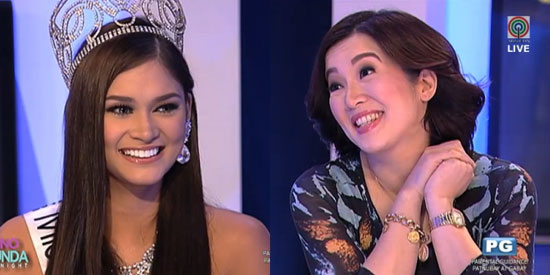 Miss Universe-Philippines 2015 Pia Wurtzbach, 25, admitted that she and President Benigno “Noynoy” Aquino III, 55, have been communicating with each other recently.

Previous reports claimed that the two were spotted on a dinner date at Bellinis restaurant in Cubao, Quezon City, last March 7.

“Are you dating my brother?” Kris asked.

Pia did not confirm nor deny that she’s dating PNoy, but she revealed that she enjoys their conversations.

Kris, in turn, was pleasantly surprised by Pia’s admission.

"At least you make him happy. He [PNoy] needs it," the Queen of All Media said.

Pia added, however, that she and PNoy are both busy with their respective duties, so getting to know each other might be a little challenging.

But as early as now, Kris eagerly declared that she approves of Pia for her brother if they eventually become a couple.

Aside from speculations about PNoy’s lovelife, he’s currently besieged by troubles due to his supposed accountability with regards to the botched Mamasapano operation, which resulted to the death of 44 members of the Philippine National Police-Special Action Force, also known as “Fallen 44.”