Matteo Guidicelli on parents of girlfriend Sarah Geronimo: “Whatever mindset they have, what they feel and think about, I respect everything...” 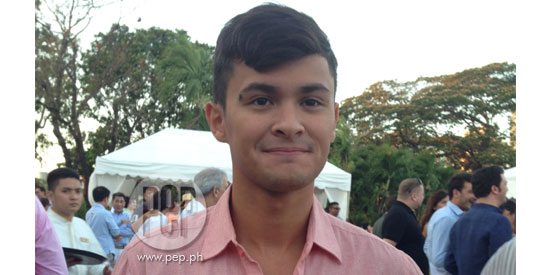 Matteo Guidicelli on Sarah Geronimo's parents: “Her parents and I, we don't think the same [way]. We don't have the same mindset, kumbaga. I can't do anything because they're the people Sarah loves the most so I love them, too, and I want to love them, too.”

“It was all good... Ang saya-saya po, sobra,” said Matteo Guidicelli about his birthday party recently hosted by Swatch.

What was the highlight of his party?

Why did his girlfriend Sarah Geronimo choose to sing Ed Sheeran's hit “Thinking Out Loud” at his party?

“And I guess that's what she surprised me with.”

Aside from her song, there were also hugs and kisses. Was he “kilig?”

“At parang she's growing, she's now happier, and to witness all of that, I just got emotional.

Aside from their PDA (Public Display of Affection), “the whole scenario, the whole scene” got him teary-eyed as well.

“My parents were there... Sarah's efforts to make me happy.

Ecstatic over what happened, he continued to rave.

The best part of the party was...

“I guess when she said thank you to my parents.

“When she gave me this message na what she wanted for me.

“That was what got me, and I'm just thankful for all her efforts... I'm thankful. I'm very happy.”

FREE TO GO OUT WITHOUT A CHAPERONE? When asked if Sarah's parents, Delfin and Divine, came to his party, Matteo answered, “Her cousins were there.”

Could Matteo and Sarah now go out unchaperoned?

“Ay, no po. We're still a couple that wants to enjoy so everything's okay.”

But it was just the two of them when they watched Ed Sheeran's concert, right?

Of late, they rarely have had the time.

He arrived alone today, March 29, at the 25th anniversary event of Belo Medical Group in Manila Polo Club. Asked if Sarah, who's also a Belo endorser, was coming, he said:

“She's shooting in Bangkok. She'll be back later tonight.”

How's his relationship with Sarah's father?

“Okay lang naman, siyempre we have other challenges here and there but, ahm, I want to keep that private between us na lang, 'di ba, dahil ayokong... I want to respect their side. I just want to respect everybody.

“So as much as possible, hindi na ako magsasagot diyan.”

Any gift from Mommy Divine?

What's important is, all is well between him and his girlfriend.

“I'm very touched with what she said [during my birthday], my family especially.

“So I was very touched also with what she said. Yun.”

Sarah's message for Matteo was: “I love you... Maraming salamat sa pagmamahal mo.

“You are now becoming a man, and I am praying, lovie, that you will continue to seek God, and that you will become the man that God has planned you to become, okay? Okay? Okay?

He said his family is supportive of their relationship. How about Sarah's family?

Again, feeling a bit awkward with the question, he said, “Okay lang.”

Matteo, being the honest interviewee that he is, added, “Her parents and I, we don't think the same [way].

“We don't have the same mindset, kumbaga.

“But I respect like whatever mindset they have, what they feel and think about, I respect everything, totally everything.

“And I hope everything will be better and happier in the future, kumbaga.”

PROPOSAL. What was Sarah's gift to him?

“Her gift to me was all her efforts. Good enough already.

“All her efforts, all her pagmamahal, all that stuff, it's more than enough, kumbaga.

“I'm just happy for Sarah. She's growing up to be a strong, independent woman.”

We asked him a second time, what was Sarah's gift to him?

With most showbiz couples getting engaged, does he see himself jumping on the bandwagon anytime soon?

Mario Dumaual of TV Patrol asked, “But it's going towards that direction?”

One more time, the reporters asked, “You're thinking about it na?”