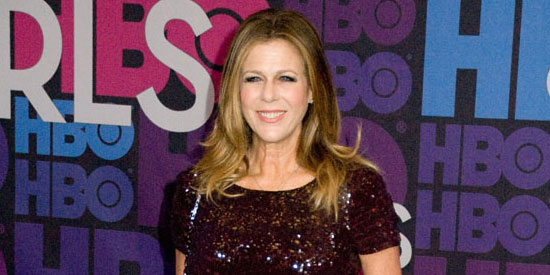 Rita Wilson, the wife of Tom Hanks, has revealed in an exclusive statement to PEOPLE magazine she has had a double mastectomy operation after being diagnosed with breast cancer.

Rita Wilson has undergone a double mastectomy after being diagnosed with breast cancer.

The wife of Tom Hanks underwent the operation to remove both of her breasts and have reconstructive surgery last week after doctors discovered she had "invasive lobular carcinoma."

Rita, 58, praised the doctors who treated her and her Oscar-winner husband Tom for his unwavering support in the wake of her diagnosis and operation.

In a statement released to PEOPLE magazine, she said: "Last week, with my husband by my side, and with the love and support of family and friends, I underwent a bilateral mastectomy and reconstruction for breast cancer after a diagnosis of invasive lobular carcinoma.

"I am recovering and most importantly, expected to make a full recovery.

"Why? Because I caught this early, have excellent doctors and because I got a second opinion.

"I have had an underlying condition of LCIS, (lobular carcinoma in situ) which has been vigilantly monitored through yearly mammograms and breast MRIs.

"Recently, after two surgical breast biopsies, PLCIS (pleomorphic carcinoma in situ) was discovered... I was relieved when the pathology showed no cancer.

"However, a friend who had had breast cancer suggested I get a second opinion on my pathology and my gut told me that was the thing to do.

"A different pathologist found invasive lobular carcinoma. His diagnosis of cancer was confirmed by, yet, another pathologist...

"I share this to educate others that a second opinion is critical to your health.

"You have nothing to lose if both opinions match up for the good, and everything to gain if something that was missed is found."

Rita made the decision to go public with her illness to try and encourage other women to get checked for breast cancer because "early diagnosis" is key when it comes to beating the disease.

She added: "I feel blessed to have a loving, supportive husband, family, friends, and doctors and that I am the beneficiary of advances in the field of breast cancer and reconstruction.

"I am getting better every day and look forward to renewed health.

"I hope this will encourage others to get a second opinion and to trust their instincts if something doesn't 'feel' right."

Rita is the latest high-profile person to go public with their cancer diagnosis and treatment.

Angelina Jolie revealed she had a double mastectomy and had her ovaries and fallopian tubes removed to minimize her risk of cancer because she carries the BRCA1 gene.

TV star Giuliana Rancic also had a double mastectomy after being diagnosed with breast cancer in 2012.