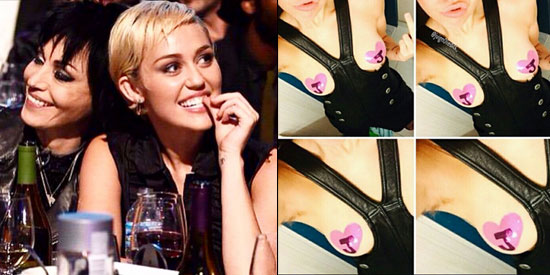 Miley Cyrus paid tribute to singer Joan Jett as she was inducted in to the Rock and Roll Hall of Fame by baring her breasts and covering her nipples with pink hearts adorned with the star's initials.

Miley Cyrus bared her breasts in tribute to Joan Jett as she inducted the singer into the Rock and Roll Hall of Fame.

Miley, who also sported unshaved armpits, gushed over Joan as she took to the stage and recalled an encounter between herself and the 56-year-old star.

She said: "We were in her bathroom, and we were smoking and just talking, and this was one of the moments in my life where I wanted to be as present and absorb everything that she said to me.

"I listened to her talk about her days with the Runaways. She talked about music... I was getting to have this moment with someone that, to me, is superwoman. What superwoman really should be."

Miley, 22, also took to her Instagram account before the event where she posted a photograph of herself in the controversial attire, which she captioned: "Joan's cheerleader."

The singer also performed at the 30th annual induction ceremony where Beatles drummer Ringo Starr become the last member of the iconic group to be welcomed into the club.

His former bandmate Paul McCartney, 72, was given the "great honor" of inducting the star whom he later performed with alongside Green Day at the bash.

Paul said as he welcomed Ringo—whose real name is Richard Starkey —onto the stage: "You don't have to look with Ringo. He's there.

"It's a great honor for me to 'induce' him... oh, induct him into the Rock and Roll Hall of Fame here in Cleveland tonight."