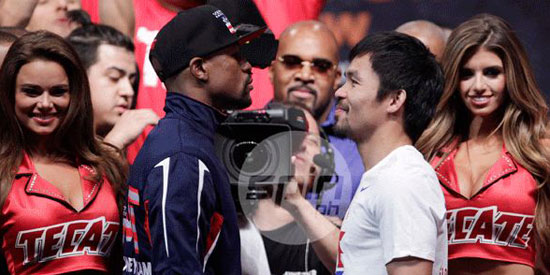 Manny Pacquiao and Floyd Mayweather Jr.'s May 2 faceoff is expected to be an explosive one in boxing history as well as in terms of profit. Check out the numbers that matter in what's aptly dubbed as "the fight of the century."

A lucrative fight five years in the making, Manny Pacquiao and Floyd Mayweather Jr. ended with the latter gaining a unified welterweight title.

Here, PEP.ph (Philippine Entertainment Portal) lists a rundown of the numbers that matter in what was aptly dubbed as the "fight of the century."

Floyd, on the other hand, currently has an undefeated boxing record with 48 wins, 0 losses, and 26 knockouts.

While many of Manny’s fans weren’t satisfied by the judges’ decision, Compubox’s final fight stats indicated that Floyd threw a total of 435 punches while Pacman attacked with 429 punches.

Floyd, on the other hand, landed 81 out 168 power punches with 48% connecting percentage.

Whereas Manny landed only 18 out of 193 jabs with connecting percentage of 9%.

With a welterweight limit of 147 pounds, Manny weighed in at 145 pounds while Floyd came in a tad heavier at 146 pounds a day before the megafight.

RICHEST FIGHT IN HISTORY. Even with a 60-40 sharing of pot money in favor of Floyd, both will still walk away from the megafight a winner, with Floyd’s estimated winnings valued at $180 million and Manny with $120 million.

With a huge number of fans raring to see this fight, that is five years in the making, total gate receipts alone has an estimated total of $72 million.

Definitely a record-breaker as MGM Grand Arena’s previous record of highest gate receipts merely amounted to $20 million during Mayweather and Alvarez’s fight in 2013.

However, only 1,000 tickets were made available to the public last April 23 (April 24, Philippine time) and was sold within 60 seconds.

For Manny’s camp alone, he secured 900 tickets for his entourage which cost him $3 million to $4 million.

Those who will watch at home, they availed the pay-per-view valued at $89.95 to $99.99 each with a projected total revenue amounting to $2 million to $4 million.

The matchup is also said to garner $300 million revenue from sponsorships, merchandise, and foreign broadcast sales.