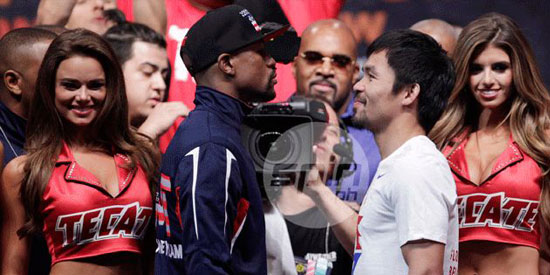 Billed as the ‘Fight of the Century,’ the match pitting two boxing superstars with contrasting styles and personalities, is set for 12 rounds before an expected record live gate attendance at the MGM Grand Garden Arena – and millions more watching around the world.

The long anticipation for boxing’s richest fight ever comes to a fitting end just before mid-noon on Sunday (Manila time) when Manny Pacquiao and Floyd Mayweather finally squares off in a welterweight unification title match the world has waited years to see.

Billed as the ‘Fight of the Century,’ the match pitting two boxing superstars with contrasting styles and personalities, is set for 12 rounds before an expected record live gate attendance at the MGM Grand Garden Arena – and millions more watching around the world.

Mayweather, 38, enters the ring a slight 2-1 favorite over Pacquiao, 36, owing to an unblemished record which had 47 opponents before the Pacman all eating the dust left behind by the elusive and stylish American.

The reigning World Boxing Council (WBC) and World Boxing Association (WBA) 147-lbs. champion, Mayweather is looking to cement his claim as the greatest fighter of all time by staking his unbeaten mark against arguably, the most dangerous opponent he’ll ever face in a 19-year pro career.

Although known for having a tough time dealing with southpaw opponents, Mayweather (47-0, 26 KOs) remains confident he’ll be able to withstand a power puncher and a relentless fighter in the mold of Pacquiao (57-5-2, 38 KOs).

“We don’t know how this fight is going to play out, but I believe in my skills. I believe I am going to be victorious.”

The most hyped fight in recent memory whose most expensive tickets fetched as much as US$7,500, was five years in the making ever since Pacquiao made himself a legitimate force in the welterweight ranks when he stopped Miguel Cotto in the 12thround of their 2009 fight for the World Boxing Organization (WBO) title.

But issues on drug testing, prize purse, and pay-per-view shares, among others, put everything on the backburner before serious negotiations took a new shape early in the year following a chance meeting between the two boxing superstars in an NBA game at the American Airlines Arena during a Miami Heat-Milwaukee Bucks encounter.

Just exactly a month after everything was sealed, and the stage was set for the biggest fight ever in this digital era of Facebook and Twitter.

Pacquiao, now a devoted Christian, said he was more than pleased to see the bout finally happening for the fans to witness and enjoy.

“On Saturday our goal is to make the fans happy with our performance,” said the eight-time world division champion, who’s expected to receive the biggest purse of his career at $120 million.

“I hope that Floyd and I do our best and to put our name in boxing history.”

Behind those gentle words, however, is a driving motivation to become the first man to deal Mayweather his first ever career loss, Team Pacquiao insiders swear.

“He is well motivated for this fight,” admitted longtime trainer Freddie Roach.

“I’ve been training Manny for this fight for five years. We know all about him, we have covered all the bases. I think we have the winning formula to win this fight.”