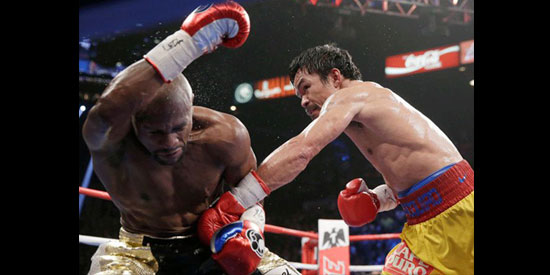 Floyd Mayweather remained unbeaten by beating Filipino hero Manny Pacquiao by unanimous decision on Saturday (Sunday, Manila time) in a fight billed as the 'Fight of the Century.'

Mayweather, 38, stayed out of Pacquiao's vaunted left and landed enough punches to eke out a lopsided decision before a disappointed pro-Pacman crowd at the MGM Grand Garden Arena.

By the final minute, Mayweather was already dancing around the ring and raising his hand, confident he had done enough to remain unbeaten in his 48th pro fight — just one short of Rocky Marciano's record.

Mayweather Jr. was money once again in the richest fight ever.

Pacquiao did what he wanted to do, chasing Mayweather around the ring most of the fight. But he was never able to land a sustained volume of punches, often looking frustrated as Mayweather worked his defensive wizardry once again.

"I'm a calculated fighter, he is a tough competitor," Mayweather said. "My dad wanted me to do more but Pacquiao is an awkward fighter."

The richest fight in boxing history — a bout that made Mayweather at least $180 million — wasn't the best. Far from it, with long periods where both fighters fought cautiously, looking for an edge.

There were no knockdowns, and neither fighter seemed terribly hurt at any time.

Pacquiao landed probably the biggest punch in the fight in the fourth round — a left hand that sent Mayweather into the ropes — but he wasn't able to consistently land against the elusive champion.

The fight was a chess match, with Mayweather using his jab to keep Pacquiao away most of the fight. Pacquiao tried to force the action, but Mayweather was often out of his reach by the time he found his way inside.

"I thought I won the fight, he didn't do anything," Pacquiao said. "I got him many times with a lot of punches."