Manny Pacquiao on his defeat against Floyd Mayweather Jr.: “I believe I won the fight.” 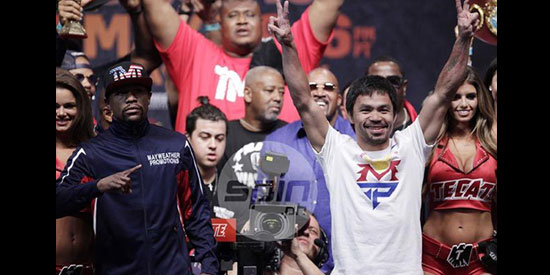 “Yeah, I mean, I got him many times. I was throwing punches. I think, I believe I won the fight,” says Manny Pacquiao, adding that he did his best to defeat Floyd Mayweather Jr. during their megafight at MGM Grand Arena today, May 2 (May 3, Philippine time).

“It's a good fight. I thought I won the fight.”

This is what Manny Pacquiao uttered as soon as he was interviewed about Floyd Mayweather Jr.'s victory by unanimous decision.

Despite his failed bid to beat Floyd's unblemished boxing record, Manny maintained that he gave his all in showing that he's a better fighter than Floyd.

“He [did] nothing. He always move[s] outside,” said Manny when asked why he believes that he's still the winner of the megafight held at MGM Grand Arena this Saturday, May 2 [May 3, Philippine time].

The People's Champ stressed that he was able to throw his fair share of southpaw jabs at Floyd.

Manny also pointed out that Floyd, who's known as a counter-puncher, merely kept on circling the ring.

“Yeah, I mean, I got him many times. I was throwing punches. I think, I believe I won the fight,” Manny reiterated.

Manny also stressed that he didn't lose the megafight just because Floyd is bigger than him.

“No, it's not about the size. I've been fighting bigger [boxers] than him. It's not a problem.”

Asked if he felt Floyd's power during the match, Manny claimed that Floyd is actually not the strongest opponent he ever had.

“I can handle his power. He's not stronger than [Antonio] Margarito or [Miguel] Cotto,” Manny stated.