SPIN.ph: Pacquiao reveals shoulder injury he suffered in training flared up starting in third round 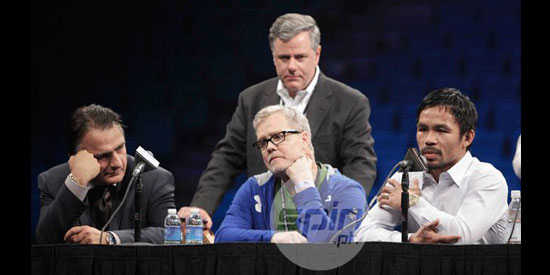 Manny Pacquiao says he suffered the shoulder injury around three weeks before the fight against Floyd Mayweather, forcing him to skip training twice.

LAS VEGAS – Manny Pacquiao isn’t one to make excuses, but he admitted hurting his right shoulder prior to his welterweight title fight against Floyd Mayweather Jr. on Saturday night (Sunday, Manila time).

The camp of the Filipino boxing champion revealed Pacquiao suffered the injury at least three weeks before the highly-anticipated showdown with Mayweather, forcing him to skip training at least twice.

Trainer Freddie Roach admitted not disclosing the injury to the public, hopeful everything will turn out to be fine leading to fight night.

It did for a while until it began to flare up beginning in the third round, the Pacquiao camp bared.

“The thing is in the third round, I already feel the pain in my shoulder that’s why I have a hard time throwing combinations. It hurts,” said the 36-year-old Pacquiao during the post-fight press conference.

According to Pacquiao, initial MRI result showed there’s a tear in his right shoulder that for a while, his team contemplated on postponing the May 2 fight at the MGM Grand Garden Arena.

But as weeks passed by, trainer Freddie Roach thought the injury was healing well that they decided to push through with the bout.

“It [injury] was getting better and better. And I think he can get through it to the fight because the progress was good enough,” said Roach.

Good enough at least until the third round when Pacquiao was suddenly bothered by it.

Top Rank promoter Bob Arum said the injury obviously affected the Filipino southpaw, a fighter known for his volume of punches but was surprisingly outpunched by the defensive-minded Mayweather on this night.

“You watch the fight and watch Manny fight before. You see how many punches he throws with the right hand and you see him threw one right hook. And the jabs? He apparently had 190 jabs (193 as per CompuBox) they say, and he landed 19,” said the 83-year-old Arum.

“Give Floyd credit for being a great defensive fighter, but there’s something wrong with that shoulder.”

But the warrior that he is, Pacquiao said it is not in his nature to cry over spilt milk and stressed Mayweather deserved the victory.

“Even though I hurt my shoulder, I didn’t complain [in the ring]. I don’t want to make alibis,” he said.