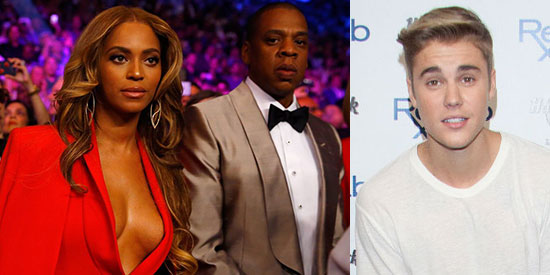 Beyonce, Jay Z, and Justin Bieber were among fans who watched the fight between Floyd Mayweather and Manny Pacquiao in Las Vegas.

Justin Bieber, Beyonce, and Jay Z were among stars who watched the fight between Floyd Mayweather and Manny Pacquiao in Las Vegas last night, May 2 (morning of May 3 in the Philippines).

The troubled musician made an appearance at the highly-anticipated event—dubbed the 'Fight of the Century'—backing victorious boxer Floyd Mayweather as he walked out at the beginning of the match, but was also spotted flirting with 24-year-old Australian model Shanina Shaik throughout the evening.

The 21-year-old "Boyfriend" singer showed off his Calvin Klein underwear and abs during a pre-fight party at the Hard Rock Hotel and Casino in a bid to impress the beauty, and was later seen joking and laughing with her as they celebrated his pal's victory on the way to an after party.

"Drunk in Love" hitmaker Beyonce was also spotted ringside in a daring red jacket with rapper husband Jay Z for the match at the MGM Grand Hotel & Casino, where they sat alongside stars including Lewis Hamilton, Ben Affleck, Denzel Washington, Jake Gyllenhaal, and Robert de Niro.

Other famous faces in attendance included comedian Jimmy Kimmel, who walked on with Manny Pacquiao at the beginning of the fight; Paris Hilton, who wore a sheer metallic top, DJ Diplo; and athlete Michael Jordan.

Meanwhile, other high-profile stars took to social media to share snaps of where they were watching the legendary fight, with Kim Kardashian revealing her and husband Kanye West had decided to watch on a comfy sofa along with pals Gabrielle Union, Dwayne Wade, and La La and Carmelo Anthony.

One Direction member Niall Horan also had his say on the fight by commentating on Twitter, where he praised 38-year-old Floyd.

He wrote: "To be fair to Mayweather, a lot of people don't like him but, he just gave a tactical masterclass tonight, doesn't have a mark on his face."