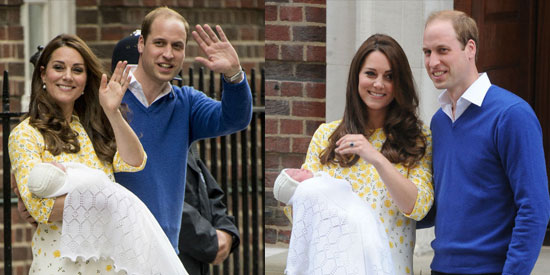 Charlotte had been the bookmakers' favorite for the name of the young royal, while the names Elizabeth and Diana have been passed down from her great-grandmother, Queen Elizabeth, and her late grandmother Princess Diana, who was killed in a car accident in 1997.

Britain's Princess of Cambridge has been named Charlotte Elizabeth Diana.

The announcement was made via the Duke and Duchess of Cambridge's Twitter account Monday afternoon, May 4, two days after the baby girl was born on Saturday, May 2, at 8.34 A.M. BST.

The statement from Kensington Palace read: "The Duke and Duchess of Cambridge are delighted to announce that they have named their daughter Charlotte Elizabeth Diana.

"The baby will be known as Her Royal Highness Princess Charlotte of Cambridge."

Charlotte had been the bookmakers' favorite for the name of the young royal—who is fourth in line for the throne after her grandfather Prince Charles, father Prince William, and older brother, 21-month-old Prince George—while the names Elizabeth and Diana have been passed down from her great-grandmother, Queen Elizabeth, and her late grandmother Princess Diana, who was killed in a car accident in 1997.

The name is bound to become even more popular due to the royal seal of approval, although it is currently the 21st most popular girl's name in England and Wales.

The child—who weighed 8oz 3lbs when she was delivered at St Mary's Hospital in central London—will now be formally known as Her Royal Highness Princess Charlotte of Cambridge.

The family have been staying at Kensington Palace since leaving hospital on Saturday but are expected to travel to their country home of Anmer Hall on the Sandringham estate in Norfolk at some point this week.

REGISTERED. Britain's Duke and Duchess of Cambridge have registered the birth of Princess Charlotte.

In a snap of the form posted on the photo-sharing site, details of her parents have been filled in by 32-year-old Prince William, while the family's address is listed as Kensington Palace, despite the fact they are planning to raise Charlotte at Anmer Hall on the Queen's Sandringham estate in Norfolk. 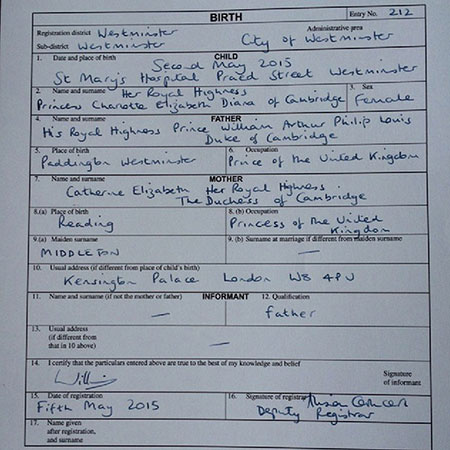 The registration of her birth comes after she was introduced to her great-grandmother, Queen Elizabeth II, at Kensington Palace.

On Sunday, May 3, the Duke and Duchess thanked people for their well-wishes, admitting it meant a "great deal to them" to have received such a positive reaction to their second child's birth.

A statement read: "The Duke and Duchess are hugely grateful for the messages of congratulations they have received from people all over the world.

"It means a great deal to them that so many people have celebrated the arrival of their new daughter."

The collection, in tribute to the new born royal also includes envelopes and a special folder in celebration of the tot, who is now fourth-in-line to the throne.

According to BBC News, a spokesperson for the post office said: "[We are] delighted to join in the royal celebrations following the birth".

A similar collection was also issued when Princess Charlotte's older brother Prince George was born in July 2013, as well as to mark the Duke and Duchess' wedding in 2011.

A statement from the royal family on Twitter read "Their Royal Highnesses would like to thank all staff at the hospital for the care and treatment they have all received.

"They would also like to thank everyone for their warm wishes."