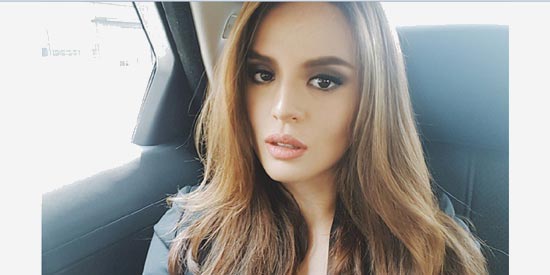 Hindi porke't Filipina raw si Georgina Wilson, na host ng Asia's Next Top Model, ay mas espesyal ang trato niya sa mga Filipina contenders. Aniya, "I made sure that I wasn’t there as a Filipina host but I was there as a non-biased host."

“I mean it’s just so difficult. And, you know, like sometimes I’d see the girls, that they’re going through hardships, that they had a really hard day or life challenges."

Dugtong ng dalaga, “And the stuff that I learned maybe five years down the line that they had to learn right then and there. In 13 weeks, they have to learn everything that I’ve learned in ten years.

“So what you see on TV, it looks a lot easier but, and also, if you think about it, our schedule’s so tiring.

“Every single day, may photo shoots sila, may challenge, may something, so there are some days, kung may off-day kami, everyone was just like, dead!

“The cameramen, everybody. Like it was just really an intense show.

"But it is a show that when you got to set, parang there’s...the energy was crazy and the buzz from everybody was so, so high because, you know, it’s Asia’s Next Top Model!”

“No, of course not!" ang mabilis na sagot ni Georgina.

“Sometimes our opinions differ, especially when it comes to the girls, and when you’re in a competition that’s so passionate, you know sometimes emotions can get heated, but never kaming nag-away.

“And she taught me a lot about the show because she had been there two seasons before me.

“Well, Monika, is in the top four so as of now there’s a 25 percent chance,” at tumawa si Georgina.

“I’m not aware yet, but, I dunno,” ang tumatawang sagot ni Georgina. “What do you know that I don’t know?”

“You know that was something that when I joined the competition I had to be very sure about.

"I made sure that I wasn’t there as a Filipina host but I was there as a non-biased host.

“To find the girl, to find a model that would really represent Asia. So I couldn’t go there being biased towards Filipinos.

“Of course, I’m always gonna be Filipino, and I’m so proud to be Filipino, but there was a very conscious decision na I would never give opportunities and favors dahil Pinoy sila.

“Ngayon naman, I can celebrate na may Pinoy sa top four pero when I was there, nung filming ng Asia’s Next Top Model Season 3, parang, I took out of my head, ‘Hindi ka Pinoy today.’

“Kasi it’s difficult, you know, as a Pinoy, you want to make sure that your kababayan does well.