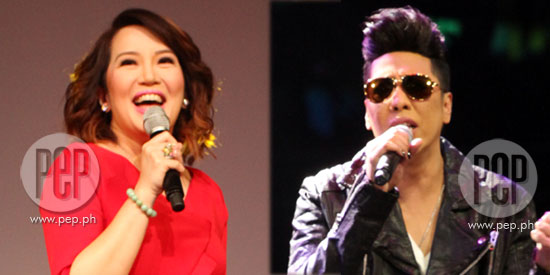 Kris Aquino and Vice Ganda received the highest honors at The PEP List Year 2. The two Kapamilya stars were named TV Stars of the Year at the glittery awards night held this Thursday, June 18, at the Grand Ballroom of Solaire Resort & Casino.

The winners, as the category suggests, were chosen by the editors and staff of PEP among the nominees for each category.

Vice, on the other hand, has two successful shows: the daily noontime show It's Showtime and the Sunday night comedy-talk show Gandang Gabi Vice.

Meanwhile, Kapuso stars Jennylyn Mercado and Gabby Eigenmann were the Editors' Choice for Teleserye Actress and Actor of the Year, respectively.

Jennylyn won for her performance as a woman who has a mulitple personality disorder in the primetime series Rhodora X, while Gabby was honored for his gay-dad role in Dading.

TV5's The Amazing Race Philippines Season 2, hosted by Derek Ramsay, took home the award for Variety/Talk Show of the Year.

Derek's revealing interview with the PEP staff picked up the prize for Best PEPtalk.

Viva heartthrob James Reid was the Editors' Choice for Breakout Star of the Year; thanks to his successful team-up with Nadine Lustre, blockbuster movies, endorsements, and hit songs last year.

PEP also honored its staff and contributors by giving out special awards for the top performers.

Rose Garcia (1st), Rommel Gonzales (2nd), and Glenn Regondola and Gorgy Rula (3rd) were named PEP Contributors of the Year; Sany Chua was chosen as PEP Photographer of the Year; and Arniel Serato was the top choice for PEP Reporter of the Year.

PEPSTERS' CHOICE. Aside from the Editors' Choice category, The PEP List Year 2 also handed awards chosen by the PEP readers or the PEPsters' Choice via online and text votes.

Teen King Daniel Padilla, on the other hand, was the PEPsters' Choice for Male Movie Star of the Year; his on- and off-screen partner and Teen Queen Kathryn Bernardo topped the Female Teen Star of the Year category.

Finally, Kapuso royal couple Dingdong Dantes and Marian Rivera, who tied the knot last december 30, 2014, topped the poll for Newsmaker of the Year.

It was hosted by Ogie Alcasid, Janno Gibbs, and Alice Dixson.

The PEP List Year 2 was presented by SM Shoes and Bags, Solaire Resort and Casino, and Hooq.