Maria Ozawa is interested to be the “President's woman” 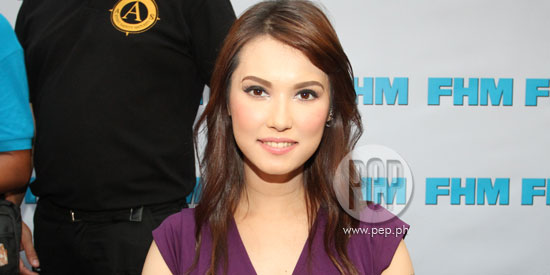 Maria Ozawa on possibility of dating President Noynoy Aquino: “If he is a playboy that means he's really good at caring persons, so I'm really into it.”

Maria Ozawa was surprised when she found out that she's in the local headlines because of President Noynoy Aquino.

The former Japanese adult video star was asked by Push.com if she would be interested to meet PNoy during her short visit in the country.

At the FHM Autograph Signing event last night, June 26, PEP.ph (Philippine Entertainment Portal) told Maria about being in the news and she said, “Oh, the bachelor!”

Maria, of corse, was referring to the Philippine president.

She added, “I heard about the bachelor President.

"They were like, 'Do you wanna be the President's woman?'

Despite getting a lot of attention, Maria is still bent on meeting our bachelor President.

She even told PEP, “But if he is a playboy that means he's really good at caring persons, so I'm really into it.”

Meanwhile, in a separate interview with other entertainment reporters, Maria was asked about her lovelife.

She answered, “I'm open to any relationship. Yes, I am single.”

The Japanese actress also admitted that it's hard to be in a stable relationship in Japan.

“It's really hard to get a boyfriend.”

She then joked, “Maybe I might get one here. Maybe.”

Maria is visiting the country for the second time to promote her upcoming movie with Robin Padilla, Nilalang, which is one of the eight official entries in the 2015 Metro Manila Film Festival.