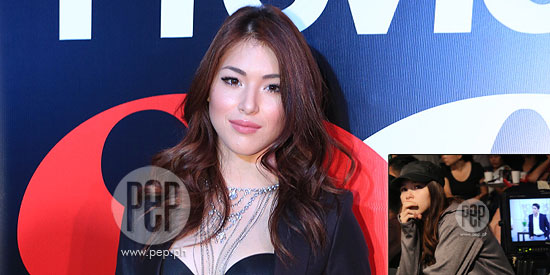 Kylie Padilla clarified that she didn’t watch the culminating activity of GMA’s specialized acting workshop because of ex-boyfriend Aljur Abrenica.

But the 22-year-old Kapuso star said that she just wanted to learn tips from director Laurice Guillen, who facilitated the acting showcase held at GMA Studio 7 last Saturday, June 27.

The workshop participants happened to include Aljur, who delivered a remarkable performance during an intense confrontation scene with Benjamin Alves.

Asked if she expected to see Aljur at the event, Kylie maintained that it’s no big deal since they are both from Kapuso network after all.

In fact, she confirmed that they also bumped into each other at the Preview Ball last Friday night, June 26.

Asked to react to Aljur’s performance, Kylie observed that it’s a good opportunity for him to further improve his craft.

FOCUS ON ACTING. On her part, Kylie believes that observing the culminating activity of GMA’s specialized acting workshop would help her get a good grasp of her role in the Kapuso network’s upcoming teleserye Buena Familia.

Incidentally, Kylie previously mentioned that one of the reasons why she decided to break up with her non-showbiz boyfriend Matt Henares is because she wants to focus on her career.

At the same time, the fact that Matt is currently based in Australia to further his culinary studies took a toll on their relationship.

HAPPY FOR SISTER QUEENIE. On a different note, PEP asked Kylie if she plans to follow the footsteps of her elder sister Queenie Padilla, who’s now happily married with a fellow Muslim.

Would she also prefer to settle down with a guy who practices the same religion?

Kylie answered, “Honestly, I don’t really think about it now.

Kylie further shared that her dad Robin Padilla fully supports her decision to find her niche in showbiz.

"As long as, you know, concentrate and give it your best and don’t waste your time.

Kylie added that she was supposed to join her dad on their family trip in Madrid, Spain, but the Kapuso actress had to beg off due to her taping for Buena Familia.