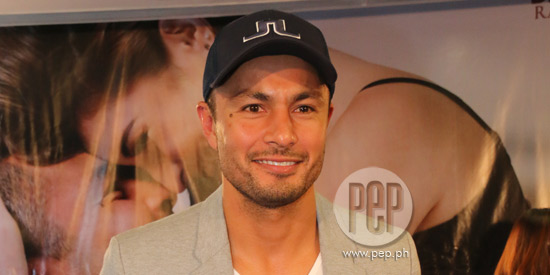 Derek Ramsay says about the daughter of his current girlfriend: "The funny thing is that she [daughter] looks exactly like Angelica Panganiban when she [Angelica] was a kid."

What if Derek Ramsay bumps into his ex-girlfriend Angelica Panganiban?

The former Kapamilya actor is set to guest on several ABS-CBN shows to promote his movie Ex With Benefits, which also stars Coleen Garcia and Meg Imperial.

During the film's presscon held at the fourth floor of ELJ building yesterday, August 22, Derek said, "I have no problem.

"I can't speak on her behalf, but I haven't bumped into her in a long time.

"If she doesn't accept it, I'm not gonna take it as an insult.

"That's her take on things.

"Sana one day, we can talk like this and let bygones be bygones."

He said he has not seen her in a long time, but sees her social media posts intermittently.

Derek and Angelica were a couple for six years before they broke up in 2012.

The actress is now in a relationship with John Lloyd Cruz.

The actor/athlete's 26-year-old girlfriend is commercial model Joanne Villablanca, who has an eight-year-old daughter who calls him "Tito Derek."

The actor described his girlfriend's daughter as "beautiful."

Smiling, he disclosed, "The funny thing is that she [referring to Joanne's daughter] looks exactly like Angelica Panganiban when she [Angelica] was a kid."

BEING FRIENDS WITH EXES. Aside from Angelica, Derek also had a past with Solenn Heussaff; Cristine Reyes; and former model Mary Christine Jolly, whom he married and with whom he has a child.

Derek told PEP (Philippine Entertainment Portal), "I wish all my exes were my friends. Ninety percent of my exes are my friends."

During the Q & A, the stars were asked how they moved on from their past relationships.

"When you see that, you will feel na she's better off without you and happier without you.

"You will be able to move on yourself and find that right person for you.

EX WITH BENEFITS? Does Derek believe in having sexual relations with an ex-girlfriend even after they've called it quits?

"Ex-with-benefits is not just about jumping into bed with them again.

"For me that's a big no-no. It will destroy whatever friendship you have after the breakup.

"Para sa akin, ang nakukuha ko na benefit from an ex is yung mga memories na you had with them.

"Every time something reminds me about my ex, it puts a smile on my face. It's always nice to smile.