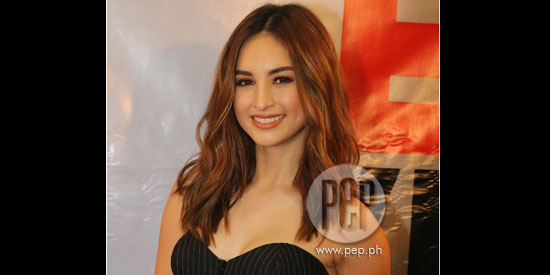 Coleen Garcia says boyfriend Billy Crawford didn't get jealous over her sexy scenes with Derek Ramsay in the movie Ex With Benefits: "No. When he first learned about this movie, dun siya medyo natakot. Pero when he found out that Derek was doing it, dun siya naging kampante. He knows that Derek is very professional."

Did she ask permission from Billy before doing sexy scenes in her upcoming movie Ex With Benefits?


Coleen added, "He has been very understanding."

She describes her boyfriend of one year as "cute na seloso lang, pero hindi siya nakakatakot."

Coleen adds that Billy, who is 10 years her senior, is "seloso na may dahilan."

"But it never came to a point that it interferes with my work."

GETTING INTO DETAILS. Coleen recalled that she initially didn't want to describe her intimate scenes with Derek, her leading man in Ex With Benefits, to Billy. But he wanted to know the details.

How daring is Coleen in this movie?

How did Billy react to her sexy scenes?

"At the end of the day, he has been very understanding and supportive, and that is all the matters to me."

REASSURING BILLY. How did she reassure Billy he has nothing to worry about?

"Siya mismo nagtanong, 'All emotions aside, tell me exactly what happened.'

Coleen understands that Billy's jealous feelings is but normal.

ON DEREK RAMSAY. Did Billy get jealous of Derek?

"When he first learned about this movie, dun siya medyo natakot.

"Pero when he found out that Derek was doing it, dun siya naging kampante.

"He knows that Derek is very professional."

Coleen pointed out that she and Derek discussed their love scenes in detail so they could finish it in one take.

"We talked about it so much para one take lang. Kailangan todo-bigay na talaga para hindi na aabot sa take 2.

"I guess the key is to prepare less but discuss about it more."