Gian Magdangal says his love life is “happily ever after”; remains good friends with ex-girlfriend Sheree 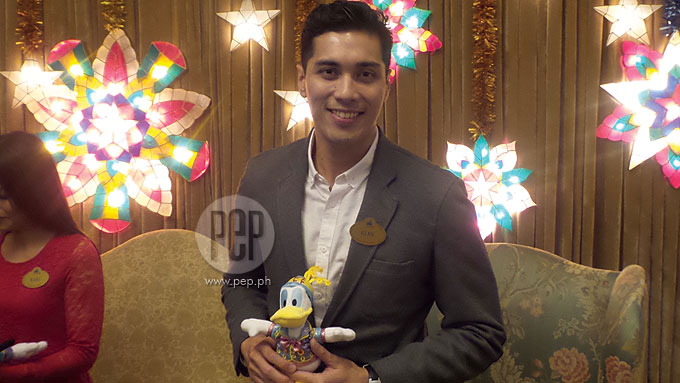 Gian Magdangal reveals his reason for working abroad: “At the end of the day, I’m a dad and I need to provide for my son and that is my main priority above anything else.”

He’s been there for just a year and already he has made it as the principal vocalist in Hong Kong Disneyland’s newest musical play, Mickey And The Wondrous Book.

The new play is part of Hong Kong Disneyland’s 10th anniversary offering and features catchy new and original Disney songs, combined with amazing live performances in synced with 3D visuals in a huge screen on stage.

The 34-year-old singer said he left a promising career in the Philippines to provide for his seven-year-old son with singer-actress Sheree.

He told the members of the press in Hong Kong Disneyland last November 18, Wednesday, that his job there has given him the security to provide for his son and send him to school.

He explained, “At the end of the day, I’m a dad and I need to provide for my son and that is my main priority above anything else.

“And for now, it’s really what I’m thinking of kasi daddy na, e.”

Gian and Sheree are no longer together, but according to him, they are able to keep a good relationship and be good parents to their kid.

“We’re on very good terms, me and Sheree are good friends.

“And we really manage to be parents to Haley in this kind of circumstances.”

HAPPILY EVER AFTER. Gian also revealed that he is happy in his new relationship.

“Masaya ang love life, it’s… happily ever after,” he said, “and I wanna just leave it at that.”

While he prefers to keep his love life private, Gian posts Instagram photos of Melissa Bell, the blonde Australian dancer whom he called “my love.”

Aside from Gian, the other principal vocalist in Hong Kong Disneyland’s Mickey and the Wondrous Book is Raki Vega, a Cebuana.

“We prepared for Mickey And The Wondrous Book for two months, we were rehearsing almost every day.

“It’s a cast from different parts of the world here in Hong Kong Disneyland, and I’m one of the principal vocalists,” Gian related.

Recently, PEP and other members of the press (print, online, and TV) were invited to Hong Kong Disneyland to experience “the happiest place on earth.”