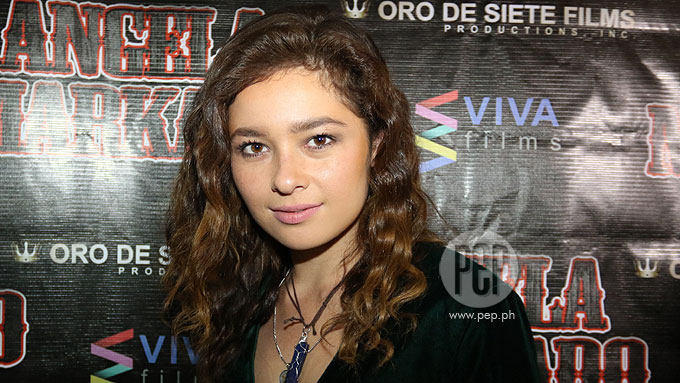 Andi Eigenmann on the unnamed father of her four-year-old daughter: “If people assumed that I’m saying that Jake is really the father, then go ahead and believe that. As long as it’s Jake, not Albie."

Andi Eigenmann doesn’t care if some people jumped into conclusions about her claim that ex-boyfriend Jake Ejercito is the “father” of her daughter.

This is in relation to Andi’s recent interview where she made a vague statement about Jake being a father figure to Ellie.

Read: Andi Eigenmann says Jake Ejercito is the "father" of her daughter

Apparently, it fuelled speculations as to whether or not Jake is the real father of Andi’s daughter.

The Kapamilya actress said, “Whatever people got from what I said, I said Jake was the father, di yun na lang.

“If you got what I said that he was the father, then he is the father.

PEP.ph (Philippine Entertainment Portal) was able to interview Andi after the presscon proper of her upcoming movie Angela Markado, held at the Music Hall in Metrowalk, Pasig City, today, November 24.

NO BIG DEAL FOR JAKE? Andi also said that she was able to talk to Jake about the whole issue when they met yesterday.

Although it wasn’t clear how he reacted to being identified as Ellie's "father," it’s no secret that Jake has always been close to Andi's daughter long after the couple broke up.

“Basta si Jake, like I explained it, I said that it doesn’t matter.

“I don’t care about DNA tests. I don’t need it.

“It does not matter who the real father is.

“What matters is who has been there from the very beginning, which is why Jake is the father.

“If people assumed that I’m saying that Jake is really the father, then go ahead and believe that.

“We have been broken up for more than a year now. [But] he’s been there for Ellie.”

Asked how her daughter copes with their odd setup, Andi replied, “Sometimes she teases me.

ON GOOD TERMS. As for being friends with Jake, Andi maintained that they have both reached the point where they understand why they had to break up.

"Medyo weird, pero at the same time, we’ve both loved each other so much.

“We were each other’s greatest love.

“But we've also wronged each other in so many ways.

“That maybe we’re not just meant to be.

“I don’t know about the future. All I know is now.”

Andi also revealed that Jake knows that she is currently dating a non-showbiz guy.

"Sabi niya, as long as it makes me happy," she added.

It seems that Andi can’t really ask for more at this point in her life.

“Now, I’m happy with someone else and I’ve moved on.

“Jake and I are friends. He’ll always have a special place in my heart,” she concluded.

Andi and Jake have been in a relationship for four years before they called it quits in September last year.