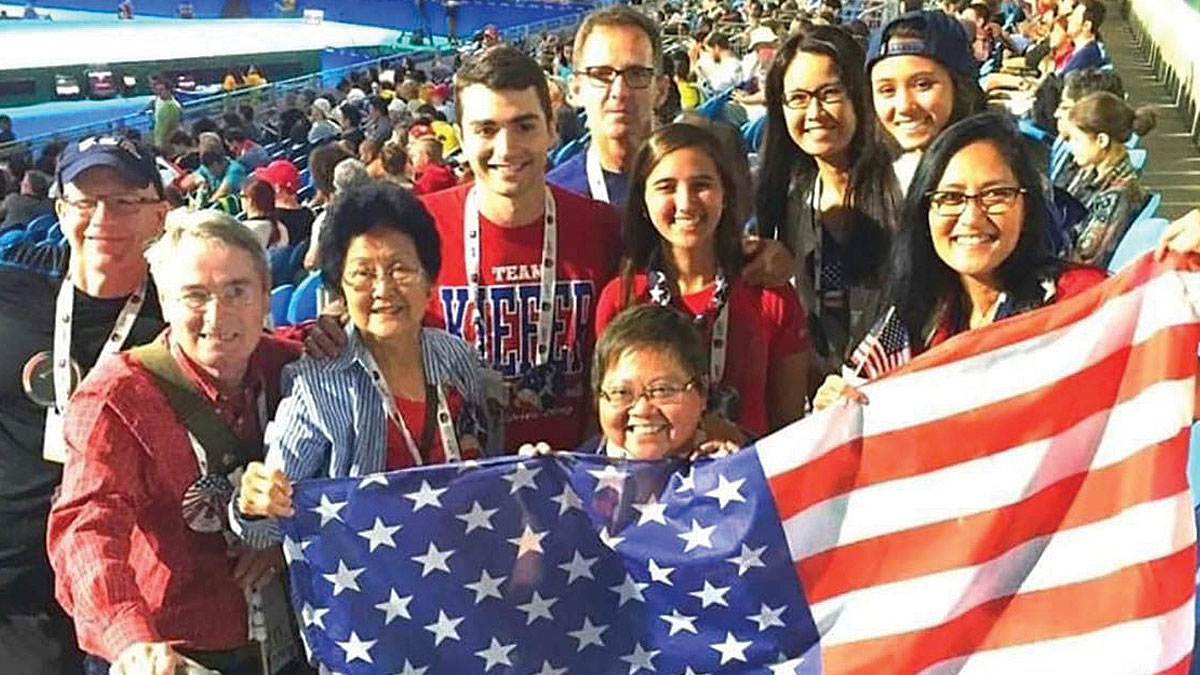 Lee Kiefer is the girl at the back wearing a cap. The family photo shows her grandmother Teresita ((left, behind the flag) and mother Teresa (right) during one of the Fil-Am fencer's tournaments.
PHOTO/S: via spin.ph

A family from Davao is celebrating a gold medal won by the United States in fencing at the Tokyo Olympics on Sunday night.

The fencer is Filipino-American Lee Kiefer, who ruled the women's individual foil event to become the first woman to win for USA an Olympic medal in that discipline.

Lee's triumph reverberated not only in the U.S., but also in Davao City and Tagum City as the eminent Bacani-Oropilla clan celebrated her triumph—a journey that began in 2012 in London as a young 18-year-old, followed by another futile try in Rio in 2016.

Dr. Janice Bacani-Carandang was ecstatic in her message to SPIN.ph moments after the historic win, "Oh my God, Lee just won the gold!"

Members of the Bacani-Oropilla then organized a virtual Thanksgiving Party led by the 92-year old matriarch Teresita, a retired pediatrician/psychiatrist now based in Louisville, Kentucky.

It wasn't an easy journey for Lee

The dream was not hers alone, it was the entire family's, which is typical of Filipino families.

A year after her stint in the Rio Olympics, Lee became the first American woman to earn the No. 1 world ranking in foil fencing, propelling her toward the Tokyo Games.

Along the way, she enrolled in medical school at the University of Kentucky in Lexington.

In March, however, Lee withdrew from medical school to focus on preparing for the Tokyo Games. She bared plans to resume her studies next March.

With the onset of the pandemic, the fencer had to be creative just to be able to train.

When COVID-19 kept her from visiting her club in Louisville, Lee practiced on a fencing strip in her parents' basement.

The fencing family is bound to grow even bigger, too. Lee's husband is also a national fencer. They were teammates at Notre Dame and graduated before marrying in 2019.

Gerek won an Olympic bronze medal as part of the U.S. men's team at the 2016 Olympics. He headed into the foil competition in Tokyo ranked No. 2 in the foil event.

On Sunday night, though, his focus was solely on his wife.

But there is no doubt Lee, who last visited the Philippines when she was six, is proud of her Filipino heritage, too.

On Sunday, a London-based aunt wrote a note in the Support Map message board and tucked it on the USA map. But Lee said to put it on the Philippine map, she said.