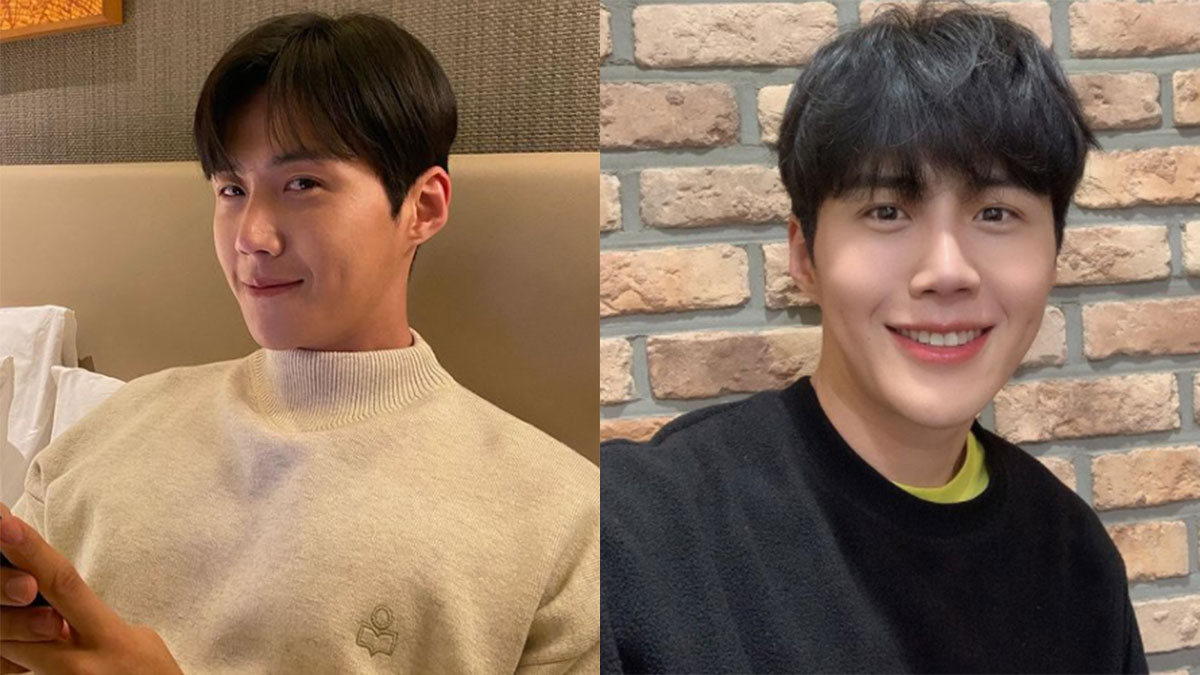 An excerpt from Dispatch's source claiming to be a close friend of K-drama heartthrob Kim Seon Ho: "Seon Ho hyung said this to me. Since it was true that he let go of his child… Since he once loved her, he tried to understand. And that he didn’t want to fight about his private life in front of the whole nation. So he said that instead of taking action, he apologized."
PHOTO/S: @seonho_kim Instagram

"Seon Ho hyung said this to me. Since it was true that he let go of his child…

"Since he once loved her, he tried to understand. And that he didn’t want to fight about his private life in front of the whole nation.

"So he said that instead of taking action, he apologized.

"Seon Ho hyung is that kind of person.

"He was in a normal relationship just like anyone else. He never tried to hide Young Ah noona. I’m a witness." 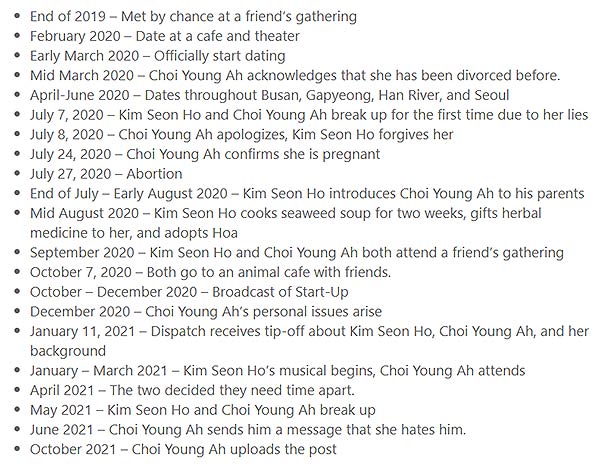 "I met up with her because I like her. Of course, my parents are worried.

"But for me, there’s no difference with a woman who was divorced."

"I’m sorry for doing this, Seon Ho, when you’re on set for shoots. I love you and I want the best for you but I know that can’t justify the fact that I’ve been lying to you. I know everything I’ve done wrong to you. I wanted us to be happy, so I tried to keep you in the blind. But I see now that it has hurt you and made you miserable. I’m so broken hearted right now, but it’s all my fault. So I’m going to learn from it and put up with this pain.

"I know you don’t want to hear me out right now and you probably can’t even believe anything I say. But you meant everything to me and so I want to apologize from the bottom of my heart again. I’m sorry for the times that I’ve hurt you.

"I’ve stayed home since last night and thought about what I could’ve done differently. I also thought about how you must have felt and what I can do from here on. I decided that I can change by being more transparent with you. I’ve always thought I’m a complicated person and so I can’t share a lot about myself, but I realize now that I could’ve just chosen to open up to you. It’s a shame I’m only seeing how easy that would have been because I know you tried to convince me once but I didn’t understand.

"It’s not that I didn’t mind lying to you. I did what I did because I love you so much. In fact, the way I feel about you is so much more than just love. I cherish you. And I have always wanted to protect you. And I think it led me to make some wrong decisions.

"Yesterday, you tried to give me a second chance so that I could make things right between us. I know I have disappointed you beyond repair at this point, but if only you could find it in your heart to let me try again, I’ll give it my best.

"Lying isn’t habitual for me. I made a mistake because we’ve been getting into a lot of fights lately and I didn’t want to make things uncomfortable between us. I was stupid to make such a choice, but I honestly wanted us to be happy. That’s all. I’m not trying to excuse myself for the choice I made. I’m just saying I was trying to do what’s best for us. I regret it deeply now.

"I know that had I told you the truth, you would have told me that it’s all okay. But I guess I became afraid that you might feel anxious deep inside. And I wanted you to feel completely safe with me. Come to think of it, I don’t know if I could’ve done the same, had I been in your position. I know you tried really hard to understand where I’m coming from. I also know that you tried to help me make the right choices, too. That’s why yesterday I felt like I can finally come clean. It scared me, but in the moment, I felt like I could tell you everything and just start over on the right foot. It must have come as such a shock to you though, I know how offended and baffled you must have felt.

"This is super selfish of me, but spending time with you made me expect a grand future for us. Yet it also made me feel terrified when you started becoming more popular with your career really taking off with those tv shows, movies, etc. I think I started feeling pressured, like I should become a better person too so that I deserve to stay by your side… so that we can have the future that we always dreamed of.

"That might explain why I started rushing into things more recently. I know I’ve been hasty with contracts and YouTube. It’s not for money or success though. It’s because I wanted to become someone worthy to be with you.

"You must be feeling extremely angry and betrayed right now. But I never, ever meant to make you feel that way. I only wanted us to be happy. I should have known better. Can you please let me fix this? I promise you, I will earn your trust back. I know you’re disappointed because I keep making the same mistakes and you don’t have it in you to trust me anymore. And I know you probably don’t even want anything to do with me anymore, but please give me one more chance. It’s all up to me to make it up to you and I really want to give us another try.

"You’re the only one I have, Seon Ho. But if you end up leaving me, I’m ready to accept that decision too-because I love you. That’s how much I love you and how serious I am about us. But if you could please give me the chance to make this right, I will. Can you please remember the good things about us and let us try again? I will never, ever hide anything from you ever again and I’ll never try to justify my wrongdoings either."

Kim Seon Ho: I just broke up [with her]. This is seriously ridiculous.

Friend A: In the morning?

Kim Seon Ho: I caught her lying early yesterday morning. I said in the past that I would cut her some slack. But she got caught lying, saying she wasn’t going to that place where that man was, but she did.

Kim Seon Ho: But the problem is that when she said it, I thought it was a different story and I thought she was meeting up with a different man.

Friend A: She must have met up with a lot of other men.

Kim Seon Ho: I met him due to work, but [he] doesn’t want to tell me the full story.

Kim Seon Ho: I told her (Choi Young Ah) that she can go to clubs and that I wouldn’t be jealous if she goes to places where other men are. Honestly, I only asked for a text message when she arrived home, but she went against that again.

Friend A: That’s all we want, but in the end…

Kim Seon Ho: Once, my filming ended early. I asked her what she was doing, she said she was sleeping. So I went to her house with a gift, but she wasn’t home. Her car was also gone. After that she said she wouldn’t lie anymore. I’m so angry.

Friend A: You should just meet a different girl. Don’t date someone who bothers you.

THE PREGNANCY AND ABORTION

"Both of them came down with swollen eyes.The decision must not have been easy to make.

"When I went to the hospital with [Choi Young Ah], [Kim Seon Ho] went to buy ingredients for seaweed soup.

"He’s not someone who is great at cooking, but…"

WHAT HAPPENED AFTER THE ALLEGED ABORTION

"After the abortion, she was close to Seon Ho’s parents.

"He also adopted a Shiba named Hoa so she wouldn’t be lonely while staying by herself."

"Her spending on luxuries were difficult for Kim Seon Ho.

"Her personal card was cut off, so she got the money from Kim Seon Ho. She bragged about it, so all of her friends know.

"I was dumbfounded, hearing about the '2 million won abortion' story.

"I’ve never seen Choi Young Ah pay for anything. Most things were paid for by Kim Seon Ho.

"Kim Seon Ho likes luxury goods? Everyone around knows who is actually obsessed with luxury goods."

Sabi ni Friend D: "Seon Ho once confessed to me that he was having a hard time because of the situation surrounding Choi Young ah.

"They were receiving threats, harassment from gangsters, harassing the ex husband’s wife, lawsuits…

"There were many stories that I couldn’t handle."

"At that time, he discovered that she had numerous audio and video recordings of him.

"Think about it from his perspective, wouldn’t that be scary?"

"There was a time when that person and I were both genuinely in love, so I feel bad seeing him collapse in an instant due to what I wrote, part of which was very strong," saad ng ex-girlfriend na kilala lang sa alias na "A."