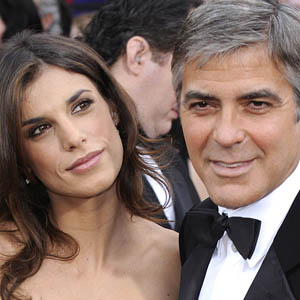 George Clooney has maintained he only met Berlusconi on one occasion. That was to discuss getting aid into the war-ridden region of Darfur, which George has been an active advocate of for years.

George Clooney has been listed as a defense witness in Silvio Berlusconi's upcoming trial.

The Oscar-winning actor and his Italian girlfriend Elisabetta Canalis—along with Real Madrid soccer player Cristiano Ronaldo—are among the 78 people named as witnesses for controversial Italian Prime Minister Silvio Berlusconi in the case against him.

Berlusconi's team hopes that the involvement of the star and a list of other high-profile names—including Italy's foreign minister Franco Frattini and Venezuelan model Aida Yespica—will help clear the prime minister of the "ludicrous allegations made against him."

A source on Berlusconi's defense team said: "George Clooney is one of several people we have included on our list of witnesses as part of our case.

"The list includes several personalities as well as cabinet ministers and they will all testify and prove that the prime minister is innocent of the ludicrous allegations made against him."

It is alleged Berlusconi paid for sex with belly dancer Karima El Mahroug, who was just 17 at the time, and took part in a number of "bunga bunga" sex parties.

In interviews following the allegations, Ms. El Mahroug, now 18, claimed George and Elisabetta were among the guests at a number of events held by the prime minister.

It is believed that the defense lawyers are hoping the witnesses will help to dismiss the teenager's claims and portray her as "confused."

The 49-year-old star has maintained he only met Berlusconi on one occasion, and that was to discuss getting aid into the war-ridden region of Darfur, which George has been an active advocate of for a number of years.

He explained: "It seems odd since I've only met Berlusconi once and that was in an attempt to get aid to Darfur."

A judge will now have to decide if George, Elisabetta, and the other witnesses in question will be officially called to court to testify in the case.