Elton John wells up at the royal wedding 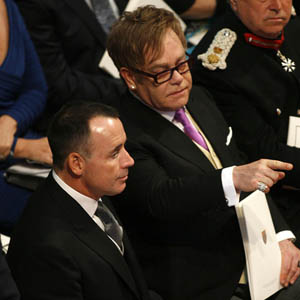 Elton John was sat next to his husband, David Furnish, in the front row of the Abbey, for the wedding of Prince William and Kate yesterday, April 29. The singer was a close friend of William's mother Diana, and performed at her funeral after her death in a car crash in 1997.

The "Tiny Dancer" singer was one of a handful of celebrity guests invited into Westminster Abbey in London to see the royal couple wed.

As he watched the union, he appeared almost moved to tears.

Elton was sat next to his husband, David Furnish, in the front row of the Abbey, for the proceedings.

The singer was a close friend of William's mother Diana, and performed at her funeral after her death in a car crash in 1997.

Other celebrities among the wedding's 1,900 guests included soccer star David Beckham and his wife Victoria.

David worked closely with the prince on England's bid to host the 2018 World Cup.

The Beckham couple described the ceremony as "beautiful and heartfelt," before adding to BBC News:

"Catherine looked wonderfully elegant, and we were honored to be part of such a special, historical day for our country.

"We wish Catherine and William much love and happiness for the future."

Many celebrities took to Twitter to pay their respects to the happy couple, including singer George Michael, who had recorded a version of Stevie Wonder's track "You and I" as a present for the couple.

During the wedding service he tweeted: "One word... Class."

Model and actress Kelly Brook admitted the wedding stirred her emotions, tweeting: "I cried all the way through!! I cried when they opened the doors to Westminster Abbey!! Stunning."

"California Gurls" singer Katy Perry decided to pay her own tribute by decorating her nails with different pictures of William and Kate.

She posted the picture with an accompanying tweet reading: "In honor of the Royal Wedding, I present you... My royal NAILS! CONGRATS."