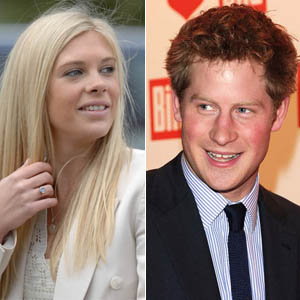 Chelsy Davy has reportedly called time out on her seven-year on-off relationship with Prince Harry after realizing she won't risk her independence by marrying into the royal family.

Britain's Prince Harry and Chelsy Davy have split up.

The Zimbabwean-born beauty has reportedly called time on their seven-year, on-off relationship after realizing she doesn't want to risk her independence by marrying into the royal family.

A friend of the pair said: "Even though Chelsy and Harry have very strong feelings for one another, Chelsy had to let him go.

"They've been together so long the next stage would be an engagement."

While Chelsy was happy to attend the wedding of Harry's brother Prince William to Princess Catherine as his "plus one" [on the wedding invitation] on April 29, she is said to have made up her mind after seeing pressure put on the new Duchess of Cambridge.

The pal added to Grazia magazine: "They've discussed marriage but her mind was most definitely made up by Catherine and William's wedding, and so while she was happy to be his date on the big day, she's now told him they should see other people.

"It has been really hard for both of them and it wasn't a decision they took lightly."

The breakup comes soon after it was revealed that Chelsy has made summer plans without Harry, and is to go on a tour of Europe with her friend Melissa Percy.

Although Harry is "besotted" with the 25-year-old blonde, reports say he has finally been forced to accept that she doesn't want to sacrifice her independence for a royal life.

Another source said: "Harry is besotted with Chelsy.

"She is the love of his life, but Chelsy is adamant she doesn't want to lose her independence.

"So she had to end the relationship.

"Chelsy's been feeling this way for some time now, but her reluctance to commit has only seemed to make Harry keener.

"However, finally he's accepted her decision."