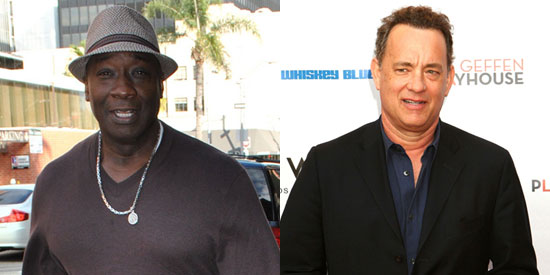 Tom Hanks (right) was one of the many stars who rushed to pay tribute to Michael Clarke Duncan (left), who passed away suddenly in a Los Angeles hospital at the age of 54, on Monday (September 3). The two co-starred in the 1999 film The Green Mile.

Tom Hanks is "terribly saddened" by the death of Michael Clarke Duncan.

Tom's The Green Mile (1999) co-star passed away suddenly in a Los Angeles hospital at the age of 54, on Monday, September 3.

Tom was one of the many stars who rushed to pay tribute to the actor.

He said: "I am terribly saddened at the loss of Big Mike. He was the treasure we all discovered on the set of The Green Mile. He was magic. He was a big love of a man and his passing leaves us stunned."

Michael's death comes just two months after he suffered a heart attack, and many of his fellow celebrities have taken to Twitter to praise him and mourn his passing.

Rosario Dawson wrote: "Oh no! Michael Clark Duncan was such a lovely sweetheart! Too young!"

Olivia Munn shared her personal memories of the actor, writing: "Michael Clarke Duncan always had a smile on his face & a big bear hug ready for you. My thoughts & prayers are with his family&friends. RIP."

Michael—who had worked as a bodyguard for celebrities, including Will Smith, Martin Lawrence, Jamie Foxx, LL Cool J, and Notorious B.I.G before finding fame—recently starred in the Bones spin-off TV show, The Finder.

His Bones co-star David Boreanaz also took to Twitter to remember his friend.

Former American Idol winner Jordin Sparks praised Michael for his kindness, writing: "RIP Michael Clarke Duncan. Thank you for being so kind to me & for sharing your talent with the world. You will be truly missed."

She wrote: "My heart and prayers go out to you @Omarosa ... I remember you telling me how happy you & Michael Clarke Duncan were - so sorry."

Omarosa, who has been dating the actor since 2010, is said to have performed CPR and resuscitated Michael in July after finding him in a state of cardiac arrest in the early hours.

She was also with him at the hospital—where he was receiving ongoing treatment following his heart attack—when he died.

Publicist Joy Fehily released a statement from her confirming the sad news.

It said: "Manigault is grateful for all of your prayers and asks for privacy at this time. Celebrations of his life, both private and public, will be announced at a later date."

Omarosa revealed she is struggling to cope with his death.

The former Apprentice star told RadarOnline: "I am devastated. He was the love of my life."

Michael's appearance in The Green Mile saw him nominated for a host of accolades—including an Academy Award and a Golden Globe, both for Best Supporting Actor; as well as Screen Actors Guild Award nomination for Outstanding Performance By a Male Actor in a Supporting Role.

Since The Green Mile, Michael went on to star in numerous motion pictures, including The Whole Nine Yards, Planet of the Apes, The Scorpion King, and Kung Fu Panda.