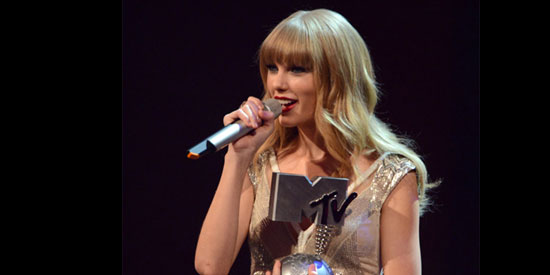 Taylor Swift—who made her first appearance at the annual awards ceremony and recently released her new album Red—picked up awards for Best Female, Best Live, and the debut Best Look award.

The 22-year-old "We Are Never Ever Getting Back Together" singer and the 18-year-old Canadian popstar scooped three awards each at the star-studded event hosted by supermodel Heidi Klum in Frankfurt, Germany.

Performer Taylor—who made her first appearance at the annual awards ceremony and recently released her new album Red—picked up awards for Best Female, Best Live, and the debut Best Look award.

Speaking exclusively to BANG Showbiz, she said: "I am so excited about tonight. It doesn't even feel real, to get to my first EMAs and to win three awards is unbelievable, I am blown away.

"I had a blast during the performance that was the most production I've ever got to do during a performance with all the circus acrobats it was so much fun."

"As Long As You Love Me" singer Justin—who was unable to attend the event as he has a concert in Brooklyn tomorrow (November 12) and is due to meet Selena Gomez for crisis talks following their split last week—picked up Best Male, Best Pop, and Best World Stage.

Other big winners included One Direction who won Best New and Biggest Fans, and Carly Rae Jepsen who picked up Best PUSH and Best Song for "Call Me Maybe," and also inspired a fan invasion during her performance of her chart-topping hit.

After the show, the 26-year-old star admitted: "My speech was horrible. I wasn't expecting to win and as you could tell—was very unprepared, I think I said thank you a million times. And I could say them a million more before I would be done.

"I'm loving being able to share my music, it's been a dream of mine since I was seven years old and to live that out, its kind of a Cinderella story to me, I feel very lucky."

Korean pop sensation Psy's was awarded Best Video for his global hit "Gangnam Style," which he performed on stage with an army of look-a-like dancers and included a special cameo by David "The Hoff" Hasselhoff.

Other performers included British "R.I.P." singer Rita Ora who kicked off the evening's festivities by performing the song as she descended from the rafters in a giant bird cage, as well as Alicia Keys, indie rockers fun, The Killers, Muse, and No Doubt who blew away the audience with their amazing live performance of "Looking Hot."