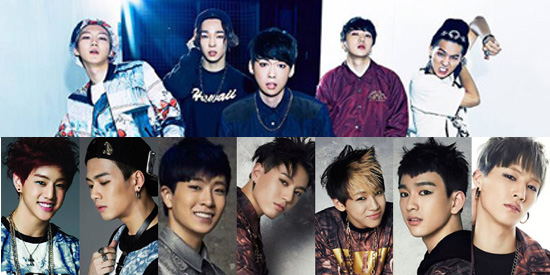 Battle of the boy bands is on for the first quarter of 2014, as JYP Entertainment and YG Entertainment prepare for the debut of their rookie groups.

JYP Entertainment is the home of K-Pop groups 2PM, miss A, and Wonder Girls.

YG Entertainment, on the other hand, is the home of Big Bang, 2NE1, and PSY.

GOT7. Last December 2013, JYP Entertainment announced that they will be launching a seven-member idol group which they dubbed as "the next 2PM."

The group’s name was subsequently revealed—Got7.

This is JYP’s first boy group since 2PM was launched in 2008.

A source close to JYP Entertainment told MyDaily on December 24 that Got7 will debut mid-January of 2014.

It said (content translated in English): "A 7-member idol group which specializes in martial arts will debut mid-January 2014.

“If 2PM are aces at acrobatics and beastly idols whose strengths are their strong and manly charms, this upcoming idol group are boys with softer charms and can also perform martial arts.

“You will be able to get a more youthful feeling from them."

The report also revealed that the first two members of Got7 are JYP’s hip-hop duo JJProject, composed of JB and Jr.

Before their debut, JB and Jr. landed roles in Dream High 2 with 2AM’s Jinwoon, T-Ara’s Jiyeon, and Sistar’s Hyorin.

The duo debuted in 2012 with their first mini-album Bounce.

GOT7 will launch their music video on January 15.

Their first-ever debut on stage will be at Mnet's M Countdown on January 16.

Their album will be released on January 20.

WINNER. Meanwhile, Allkpop.com also reported that YG Entertainment is preparing to introduce WINNER by the end of February.

It will be YG’s newest boy band eight years since Big Bang was launched.

First introduced as Team A, they emerged as winners in the reality-talent show Who Is Next: WIN.

“After this program ends, WINNER will release their debut album.

"At the moment, WINNER is scheduled to release their debut album in the last week of February.

"WINNER are putting their all into working on their debut album with the YG producers these days. The chances of the WINNER members' self-created songs also being included in this album are high.

"WINNER's first album will be a mini-album.

"WINNER will release their first mini-album, making their official debut in the K-Pop scene, and will start their promotions."

EXO. JYP and YG’s rookie groups will go against SM Entertainment’s 12-member idol group EXO, which has been making waves in the past two years.

Launching new boy bands was a strategic move on the part of K-Pop’s "Big 3" agencies, which have been looking for possible avenues to grow and ensuring steady return of their investments, with most of their boy band members enlisting in the military.

Kpopstarz.com stated that of late, "military service enlistment" has been one of the “greatest vulnerabilities” of launching a boy band.

"Fans could leave. This could be avoided if the same agency releases a new group to take their place."