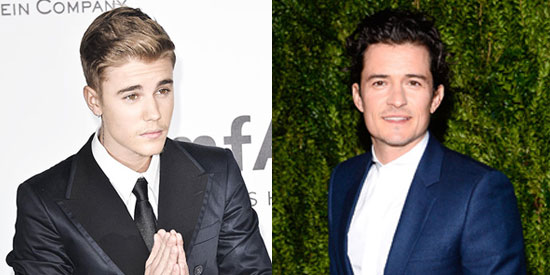 Orlando Bloom allegedly threw a punch at Justin Bieber at a restaurant in Ibiza in the early hours on Wednesday, July 30, after the singer called him a "b***h."

The Pirates of the Caribbean actor reportedly tried to hit the 20-year-old singer while out at Cipriani restaurant in Ibiza in the early hours of Wednesday morning, July 30.

On video footage obtained by website TMZ, the "Beauty and the Beat" hitmaker can be heard shouting: "What's up b***h?"

TMZ also reported that after ducking the punch, Justin quickly left the venue as other guests at the party started applauding the English actor.

As well as Orlando and Justin, other stars at the party at Cipriani included Paris Hilton and P. Diddy.

Meanwhile, an insider told HollywoodLife.com: "Orlando is not a violent person. In fact, he's all about promoting peace.

"However, he will not tolerate a person, Justin Bieber included, who doesn't respect women.

"He thinks Justin needs to be put in his place and Orlando is well aware that Justin has badmouthed him before."

An eyewitness, who claims to have seen the Lord of the Rings star's alleged swing at the "Beauty and a Beat" hitmaker insists the actor deliberately didn't connect with the pop star.

They told the website: "In mid-throw Orlando realized what he was doing and pulled back, making it look awkward and something that didn't connect."

It is unknown why the pair started fighting, but the troubled pop star has been linked to Orlando's model ex-wife, Miranda Kerr—the mother of his three-year-old son Flynn who he split from last October—in the past.

The pair were even spotted partying together after a Victoria's Secret fashion show in 2012.

To add yet more fuel to the fire, in April 2014, Orlando enjoyed a meal out with Justin's on-off girlfriend Selena Gomez.

After the alleged punching incident, Justin Bieber posted—and then quickly deleted—a photo of Miranda on his Instagram account; the biggest indication yet that the feud was caused by his rumored relationship with the brunette beauty.