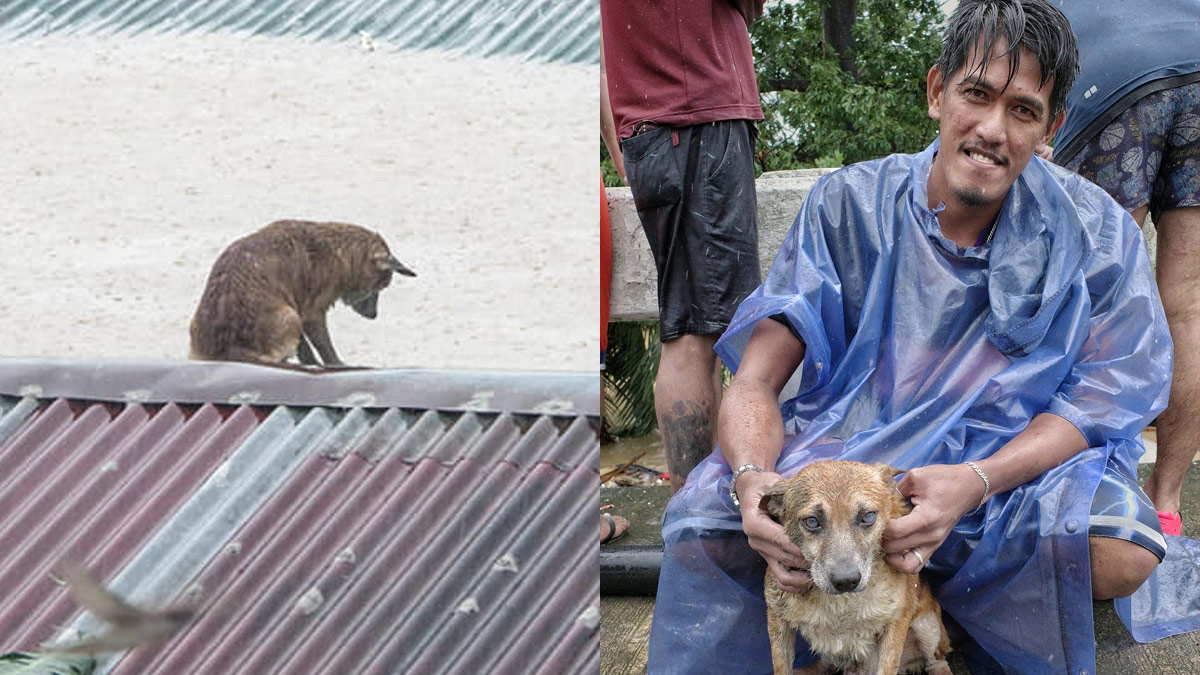 Early Thursday morning, November 12, 2020, a dog named Rambo is stranded on the roof of his owner's house in San Mateo, Rizal amid rising floodwaters brought by Typhoon Ulysses. The photo is taken by Larry Monserate Piojo.
PHOTO/S: Courtesy of Larry Monserate Piojo on Facebook

As typhoon Ulysses causes major damage in parts of Luzon, the calls for rescue have flooded social media.

Photos showing people stranded on the roofs of their homes submerged in floodwaters have been shared in hopes that help will come soon.

But one particular photo—that of a dog named Rambo—has touched the hearts of many Filipinos.

The dog was on the roof of his owner's house in San Mateo, Rizal amid rising floodwaters brought by Typhoon Ulysses.

Larry's post immediately went viral. At press time, it has received more than 109,000 reactions and 160,000 shares on Facebook.

In an update posted an hour later, Larry revealed that Rambo has been reunited with his owner JR.

He wrote, "For those asking, Rambo, the dog stuck on a rooftop has been rescued and reunited with his owner, JR."

THE IMAGE OF RESILIENCE

Filipinos have been lauded for their resilience in the face of disaster. But many are becoming tired of simply being resilient.

A local artist succintly expressed this in an artwork that was inspired by Rambo.

"Nakakapagod maging resilient" was seen written on the art card posted on the artist's Facebook page. The post garnered 14,000 reactions and 12,000 shares just three hours after it was uploaded.

Netizens are taking to social media with calls to stop glorifying Filipino resilience and instead demand action and accountability from those in power.

Actor Ahron Villena used his Facebook page to remind his followers to help animals as well.

His post read: "Please help them. Everyone is worthy to live in this kind of condition. Nevertheless we need to reminisce that the world is not just for people, animals are also fighting for their lives too. #Animals are deserve to rescue. Lets share this message and make a difference."

Millions of Filipinos in parts of Luzon have been affected by the typhoon Ulysses, which made its first landfall in Quezon on Wednesday evening, November 11.

Thousands of Filipinos had to be evacuated as the destructive winds and heavy rainfall left areas of Metro Manila, Cavite, Quezon, Bicol, and Laguna submerged in floodwaters.

Celebrities Angel Locsin, Gerald Anderson, and Maja Salvador, among many others, have offered prayers to the residents of Metro Manila and Luzon.