VIRAL: Painting of tiny sardine can stirs conversation on ayuda 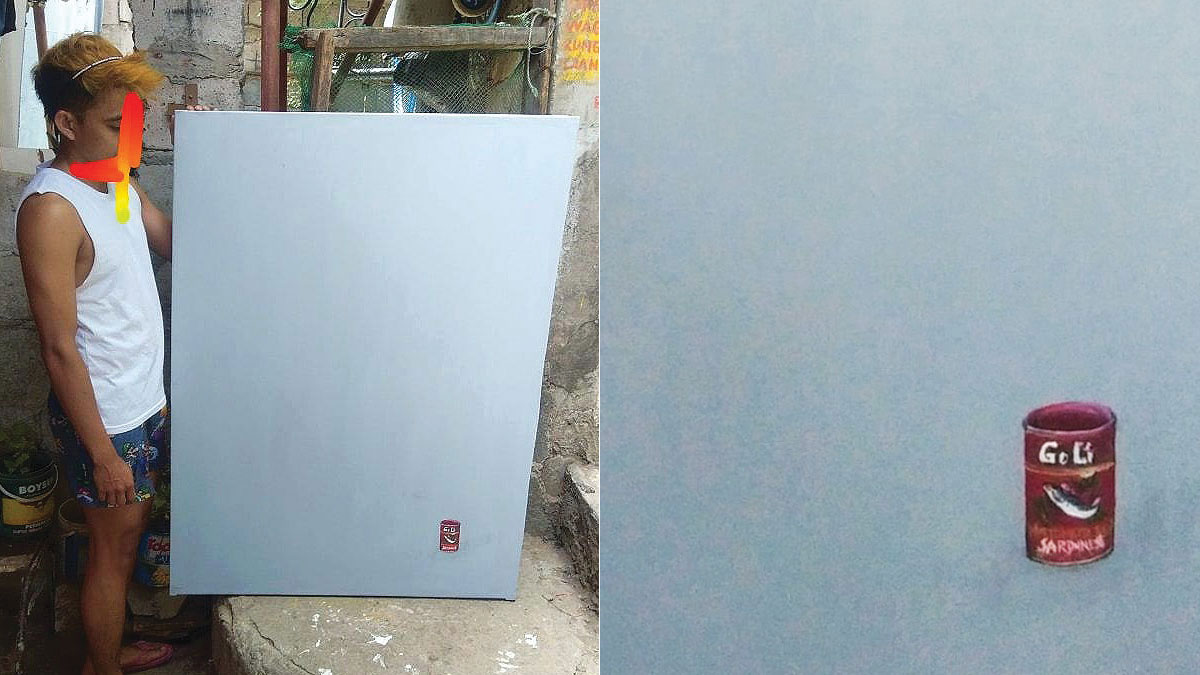 Is ayuda or aid from the state enough as the COVID-19 pandemic stretches into its second year? A University of the Philippines Fine Arts student answered this with a painting of a tiny can of sardines in angry red.

"I understand that unless the needs of the people are diligently provided, the people will always be lost and relentlessly devoured by the swelling void of hunger, negligence, and apathy. Ayudas are like Filipinos: mistreated and mishandled," he told reportr on Saturday.

For the 2021 lockdown or two-week ECQ in Metro Manila, Laguna, Rizal, Cavite and Bulacan, some P23 billion in aid or ayuda was handed out -- P1,000 per person or up to P4,000 per household. Billions of pesos in direct cash aid was given to indigent families in 2020 on top of assistance in kind.

Pasaylo entered his work for competition at the 2021 GSIS Painting Competition, where the top prize in P300,000. He has yet to receive word if he got in.

"Believing that my artwork wasn't accepted by the institution nor qualified in the competition, I decided to just post my artwork to still deliver what I supposed is a portrait of the Filipino situation this pandemic."

Pasaylo said he was not planning on selling his painting until he got a call from a buyer. He is selling his other works, including one entitled "Pietang Ina."

MORE ON AYUDA AND COMMUNITY PANTRIES:

P2,000 Ayuda Sought for Every Filipino in Bayanihan 3 Bill

President Rodrigo Duterte has yet to decide on the fate of the MECQ, the second highest quarantine, that keeps some 24 million people in Metro Manila and surrounding provinces in a bubble.

Socioeconomic Planning Sec. Karl Kendrick Chua has called for a downgrade of the MECQ after it ends on May 14. Earlier this week, March jobs data showed some 2 million got their jobs back, but the recovery could be reversed once the April numbers reflect the impact of the lockdown.

The economy is in its deepest recession since World War II ahd a fresh surge in infections that started in March threatens to drag on the recovery.

Millions Got Their Jobs Back in March, ECQ Threatens to Reverse That

Why Virus-Hit Philippine Economy is Lagging in Southeast Asia

We are now on Quento! Download the app to enjoy more articles and videos from PEP.ph and other Summit Media websites.
Read Next
Read More Stories About
Jadie Regala Pasaylo
Post a Comment
Featured
Latest Stories
Trending in Summit Media Network