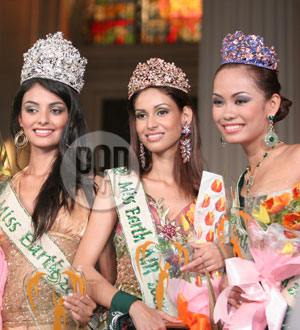 Miss Earth 2006 could have taken place in Chile, but instead the next best thing happened to that South American country: its representative, Hil Yesenia Hernandez Escobar, brought home the crown.

The annual international beauty pageant, which attracted more than 90 delegates this year, was originally supposed to take place in Santiago, Chile. However, when local organizers failed to meet the deadline for hotel bookings and media coverage, the pageant took place once more in the Philippines.

On November 26, at no less than the National Museum in Manila, the Miss Earth 2006 coronation night pushed through.

Getting the attention of photographers was Fil-Canadian Riza Santos, representing Canada, who won the Miss Photogenic award. Riza showed her pride in her roots when they were presented at the Trader's hotel last November 9.

Hosts for the evening were Ariel Ureta, Miss Philippines-Air 2006 Ginger Conejero, and Miss Earth 2004 Priscilla Meirelles, who is from Brazil.