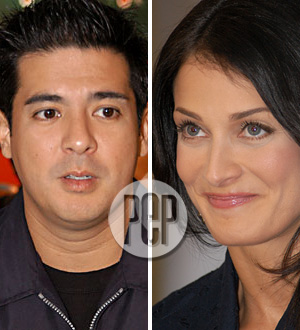 Aga Muhlach said he was open to the idea of being cast in a film opposite his ex-girlfriend, former Miss Universe Dayanara Torres, if such a project were offered to him.


This was Aga’s response to Dayanara’s comment—which she gave to PEP in an interview last November 10—that she was “open to work” with the man she almost married, if such a project were offered to her.

After more than eight years of not stepping on Philippine soil, Dayanara was in the country this month to endorse the cosmetic surgery clinic Beverly Hills 6750. Aga and Dayanara did not see each other while she was here.

Aga and Dayanara’s first and last film together was the 1995 film Basta’t Kasama Kita—a movie inspired by the Hollywood classic Roman Holiday. After working on that film, Aga and Dayanara’s relationship blossomed beyond the set and became a widely-followed romance that lasted for more than two years. The buzz in local showbiz was that Aga built his Ayala Alabang home for Dayanara. Their relationship ended when the beauty queen went back to Puerto Rico in 1999 to pursue career opportunities both in her country and in the United States. The 1993 Miss Universe, after all, had more going for her than a fabulous face: she could act, dance, sing, and host.

One year after, in 2000, Dayanara married popular Puerto Rican singer Marc Anthony, but the marriage ended in divorce in 2004, with Marc Anthony going on to marry Latina diva J.Lo just four days after his divorce. Dayanara has two children with Marc Anthony—Cristian and Ryan, both of whom stay with her in her new Los Angeles home. She has a recurring role in a television soap, several endorsement contracts, and a musical career too.

Aga married Charlene Gonzalez in 2001. Charlene was the Philippines’ bet in the 1994 Miss Universe pageant where Dayanara was the outgoing queen. Charlene and Aga have twins—Andres and Atasha, who live with their parents in Ayala Alabang. Mother and father are now top celebrity endorsers, and their children are shaping up to be so as well.