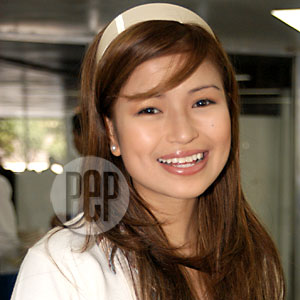 
Say’s friend and fellow Pinoy Big Brother (PBB) housemate, Nene Tamayo, secretly married her U Can Dance dance partner, Anthony Plamio, on October 3—a few days after her September 27 birthday. In an interview with The Buzz last Sunday, Nene admitted her whirlwind romance and wedding.


Fresh from her two-week U.S. vacation, Say says she didn’t have any idea what her close friend revealed. “Tulog ako noon kasi jet lag. Nagising ako 8 pm na. Pagtingin ko sa phone ko, ‘Nene’s married!’ Uma [Khouny] was calling me. ‘Nene got married. Did you know about this?’ Sabi ko ‘No.’ Sabi nila, ‘You’re lying. She mentioned in The Buzz that you knew about it.’”

Nene is starring in her first movie, Shake, Rattle and Roll 8.


When asked why she herself doesn’t have a boyfriend, Say says she isn’t picky. “Basta ayoko lang ng taga-showbiz,” she says, sounding final.