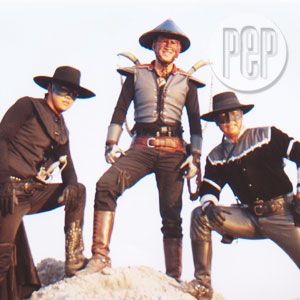 Action movies suggest a search for heroes capable of delivering us from hated bureaucrats, warlords, and other villains of society. Suspense thrillers, on the other hand, suggest a need for intense excitement, uncertainty, and nerve-wracking tension.

Both genres are well represented in this year's Metro Manila Film Fest (MMFF). Ligalig from CM Films is a thriller and whodunit movie that will challenge the viewers, while Tatlong Baraha is a period film that stars three unlikely heroes summoned from the past to help their fellowmen.

Husband and wife Cesar Montano and Sunshine Cruz take a hands-on approach in producing their film Ligalig. Cesar serves as producer, director, screenwriter, and actor in this CM Films' MMFF entry, while Sunshine doubles as actress and line producer. Ligalig also marks the comeback of Sunshine to the big screen after an almost nine-year absence from filmmaking.

LIGALIG
Cast: Cesar Montano, Sunshine Cruz, Celia Rodriguez, Johnny Delgado, John Regala, Rebecca Lusterio, Gwen Garci, Katya Santos, Monsour del Rosario, Bayani Agbayani, Nonie Buencamino, Rommel Montano, and Alvin Anson.
Writer & Director: Cesar Montano
Production: CM Films
Plot: A series of killings takes place in a seemingly quiet town. Junior (Cesar), a taxi driver, is aware of the killings, but these don't seem to bother him. He's focused on his new relationship with Trixie (Sunshine), a nurse. Little does Junior know that the serial killer will hit close to home. Cesar says, "Lahat may sayad...Yung buong istorya, talagang ‘pag sinimulan mo, hindi nawawala ‘yung danger. Parang anytime something wrong is going to happen."
Box-Office Potential: In a year when fantasy and horror films are aplenty, the male populace will still be divided between the suspense-thriller Ligalig and the only action film in this year's roster, Tatlong Baraha. We place our bet on Cesar's movie.
Awards Prediction: Cesar has proven that he is not only a very good actor but also an effective director—his Panaghoy Sa Suba, an entry in the 2004 MMFF-P, won numerous awards. Rated A by the Cinema Evaluation Board (CEB), this is a potential winner. Cesar's only major competition for the best-actor plum is Rustom Padilla who plays, uhm, a gay role. Celia Rodriguez and Johnny Delagado play their characters over the top, which some jurors might find attractive for the best supporting acting categories.