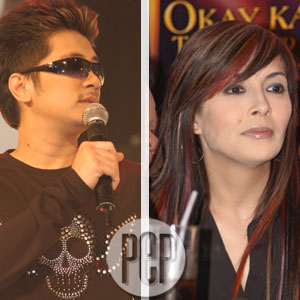 Janno Gibbs and Bing Loyzaga still live together with their two daughters although their relationship now is more of best friends.

Janno Gibbs admits that he still lives with his actress wife, Bing Loyzaga, despite rumors that the couple have separated.

The couple also confessed that they have learned to ignore all the bad talk about them, particularly the talk about Janno being a womanizer.

Meanwhile, Bing also said that she has cleared things with Janno’s co-host, Regine Velasquez. Rumor had it that Regine and Janno had a relationship when they did concerts together and began working in SOP (Sobrang Okey Pare), a GMA-7 Sunday noontime show.

Both Bing and Regine met up in the SOP Christmas party held recently. Bing represented her husband, who was then in a two-week European tour with Ara Mina and Cristine Reyes.

Bing said she hoped the friendship that she and Janno now enjoy will be for good. Still in StarTalk, she asked the press not to read any more negative meaning into the relationship: “Pakiusap ‘to, kasi gusto ko na maging pangmatagalan ito. Yung hanggang naka-weelchair na ako, hanggang uugud-ugod, gusto ko magkakasama pa rin kami.”

Janno and Bing were last seen together in Eat Bulaga’s “Bulagaan” last December 23, along with other cast members of Enteng Kabisote 3: The Legend Goes On and On and On. Bing Loyzaga played the role of the villain Satana.