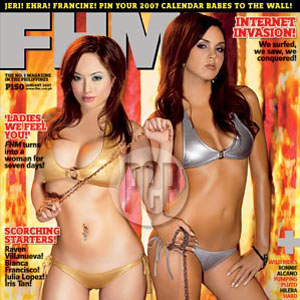 FHM sets the Year of the Pig on fire with Ran Online's explosive duo: Gwen Garci and Jocelyn Oxlade.

Now, picture that in your FHM magazine this January 2007.

As a Viva Hot Babe original member, Gwen is no neophyte when it comes to posing sexy in magazine covers. She appeared in FHM as early as September 2003.

Gwen, who is in the cast of the Metro Manila Film Festival entry Ligalig, has been in the news the past year with the heated exchange of words between her and ex-boyfriend Andrew Wolff. Gwen says she learned a lesson from that messed-up relationship: she is now more careful in choosing her men.

She says in the FHM interview, "Kailangan sila naman ang mag-alaga sa akin. They should pamper me and show that they're really sincere."

Gwen also feels honored to be back on FHM. "As for this shoot, I'm up for it because I know I started as a sexy star and, of course, this is FHM!" says the Viva Hot Babe.

Incidentally, Gwen admits in her interview that she enjoys playing computer games. Doesn't that make her extra hot? Admit it, it's a major turn-on for guys when ladies know how to play computer games!

Like Gwen, this is not the first time for Jocelyn to pose for FHM. She had her introductory shoot in June 2005.

Jocelyn, who enjoys playing PC games herself, has plans of becoming a hip-hop artist someday.

In her FHM interview, Jocelyn also points out that she's more than a bikini model.

She says, "I'm more than that. Also I'm not just a model—I'm a singer, I'm a host, I graduated college. I want people to know that I'm no bikini babe airhead."

(With reports from Allan Hernandez)