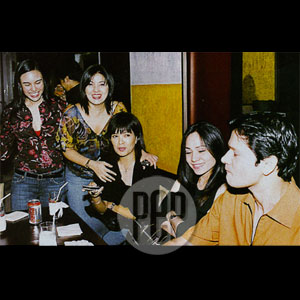 The latest story on Gretchen Barretto is that she "snubbed" Senator Ramon "Bong" Revilla at the party that their long-time friend Lorna Tolentino threw to celebrate her 45th birthday. In the party held last December 23 at Senator Jinggoy Estrada's MDC Bar on Wilson Street in San Juan, Gretchen was seen warmly greeting Bong's wife, Lani Mercado. She was not seen greeting Bong, who was right beside them.

The back story to this is, of course, that Gretchen and Bong had once carried on a brief but intense love affair. This was roughly during the period they top-billed the film Ako Ang Katarungan (1992). At the time, Gretchen was single, with a boyfriend, while Bong was very much married to Lani, with whom he already had three children. (Bong and Lani married in civil rites in Glendale, California, on May 28, 1986, and remarried in Catholic rites in Imus, Cavite, on March 25, 1998.)

In the end, Bong chose Lani over Gretchen, effectively ending the four-month affair. Since then, Bong and Gretchen have lived separate lives--with Bong seen to be a good provider and protector to Lani and their present brood of six, and with Gretchen seen to be devoted to her partner Tonyboy Cojuangco and their only child.

Still, there has never been bad blood between Gretchen and Bong. Gretchen remains close to the Revilla clan, and is proud to say that Bong's siblings still remember to invite her to their gatherings and that, for as long as she's in the country, she always attends.

Moreover, Gretchen and Bong still have their lines open and have never been heard to speak ill of each other. To this day, when Gretchen is asked what kind of person Bong is, the comebacking star--who takes pride in saying she tells it as it is--always says: "Bong is mabait, talagang mabait na tao."

If there'd been a snubbing incident between them, therefore, that would be news. Expectedly, television and print reporters attending Bong's post-Christmas party for the press yesterday, December 28, at Annabel's on Tomas Morato in Quezon City, went about soliciting Bong and Lani's reactions to the "snub."

The Revilla couple, seasoned to the ways of showbiz, remained gracious to the insistent reporters, even as they parried the questions with broad and safe goodwill messages and best wishes they sent Gretchen's way.

Curious, PEP (Philippine Entertainment Portal) asked Gretchen via text message, at around 7 a.m. today, what the "snub" was all about. Gretchen, who is currently in Singapore for more holiday time with family and for more personal shopping, called back at 11 this morning to give her side.

Since Gretchen talks a mile a minute and needs very little prodding once started, here is her statement with the least interruption from PEP.

"So when I saw him at LT's [Lorna Tolentino] party, di ko na nga siya pinansin. Di ko naman alam mas makakagawa pala ng gulo iyon! Ngayon nagkaroon pa ng publicity na ganoon. I was not thinking that would be the effect. I was doing it for Lani's good.

More seriously, she proceeds: "What can I say? I have asked Lani's forgiveness. I'm still saying sorry. I have wronged her. I was with Bong, and I want to tell the world that it was a big mistake. I want to tell everybody out there that there are consequences to what we do.

"I'm going through the consequences of my mistake. Up to this day, I carry that load. Every time I face Lani in any Revilla occasion, I know I'm the one that was wrong. I made a mistake. I went out with him. So if I have to suffer snubbing from her for the rest of my days, I just know I have to take it."

Gretchen says there has been more than one occasion when she has had to suffer Lani's snub.

Lani's forgiveness, Gretchen says, is something she seeks to this day. "I'm wishing sana mapatawad na niya ako. Sana mapatawad din niya si Bong. All the time, it's one of my biggest wishes."

Gretchen wants to make clear that she's not complaining about Lani. She says she's simply explaining how things are between her and Bong's wife.

"I have to take the hurt," Gretchen repeats. "I've done more harm to her---how can I complain about the hurt? I was her husband's mistress. It's the truth. I will spend my life saying sorry to her for that."